The APX7000 is Motorola's first dual-band, portable, public safety radio along with it's ruggedized counterpart - the APX7000XE.

Like most of the recent full-size public safety radios produced by Motorola, the APX7000 has a volume knob, a channel knob, three programmable side buttons, a two-position concentric switch (ø/o switch), a three position mode switch and an orange "emergency" button, and PTT button, all of which can be programmed to the user's liking (with the exception of the PTT button). It is produced in two basic models; the model 1.5 which features an 8-character, multi-colored backlit display on the top of the radio without any numeric or navigation keys, or the model 3.5 which features the aforementioned top display as well as a full RGB LCD front display, full numeric keypad , four-way menu navigation keypad, home button, data button, and three menu-selection buttons.

The APX7000 is the first dual band portable radio produced by Motorola and are manufactured with the ability to operate in any two of the four major public safety bands (VHF, UHF1, UHF2, 700/800MHz).

On both the top-display and dual-display models of the APX7000, an integrated GPS comes standard. On the dual-display model, the user can view their exact coordinates as well as set waypoints, "home" and destination coordinates. CPS enabled features like and emergency keep-alive, peer-to-peer GPS location data and distance to predetermined destinations are also available. Location services can be turned off (if the CPS allows for it to be toggled) in the radio menu.

The APX7000 is the first radio released by Motorola that is able to have both front-panel programming (FPP) as well as trunking options enabled in the same FlashCode at the time of its release. Although the ASTRO25 series were able to be upgraded to this option with later firmware and FlashCode upgrades, this wasn't available at the time of the ASTRO25 series release and didn't come to fruition until several years later.

Along with other members of the Apex family, the APX7000 was built with a "T-Grip" shape, for two main reasons; to make the radio more fitting and slip-resistant to the user's hand (even while wearing gloves), and to make space for the 8-character top display while still having room for the standard top-mounted controls.

(steady = in GPS range, flashing = out of GPS range)

Possibly the most flashy and informative new feature of the APX7000, is its colored lighting. The display and keypad have a backlit state of four colors (Green, Red, Orange and White). There are two options for how the radio changes the color of the display and keypad backlighting. The first option is color changing in response to conditions of the radio known as Intelligent Lighting, described below in detail. In earlier firmware releases this was the only way the radio changed its colors. With newer firmware releases Intelligent Lighting can be entirely disabled in favor of a CPS-defined color applied to each channel in the Zone-Channel Assignment with the radio switching color according to which channel it is currently monitoring. This can be useful when scanning to know the category of a received message at a glance (EG: green for law enforcement and red for fire/EMS).

Intelligent Lighting uses the radio's multi-colored backlit keys, top display and LCD screen to alert the user of the radio's state at a glance. In all of these intelligent lighting states, the top display and keypad backlights will turn entirely one of the four colors, while the main screen will display a band of the same color for a lower portion of the screen, along with the notification itself. The radio in its normal state is has white backlighting. 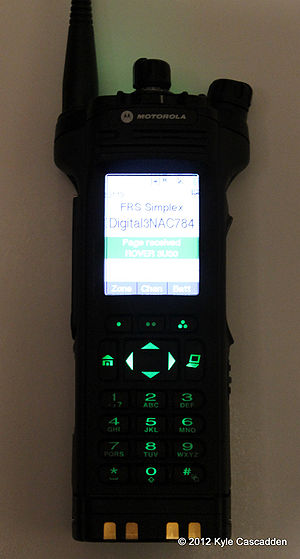 Red indicates a critical error alerts the user of three states of the radio;

Out-of-range (trunking only)
"Out of range" is displayed when the radio cannot connect to a trunked system due to geographic constrains, incorrect programming parameters, faulty antenna connections, etc.

No Comms (trunking only)
This indicates that the radio tried to contact a trunked system, but has failed, yet the radio can hear the system. The radio in this mode can sometimes receive traffic but likely is unable to transmit. Commonly this will occur when a subscriber unit is on the fringes of a system's coverage.
Sys Reg Refused (trunking only)
This indicated the radio has attempted to affiliate with a trunked system that has refused the radio's ID.

Being that the APX7000 is capable of APCO Project 25 Phase 1/2 standards, it is capable of Over-The-Air Rekeying (OTAR) and Over-The-Air Provisioning (OTAP) for changing encryption keys and basic codeplug reprogramming without leaving the user's hand.

The APX7000 is certified to FIPS 140-2 level 3 security. It is capable of AES-256, AES-GCM, DES-XL, DES-OFB, DVP and ADP encryption algorithms for interoperability with older algorithms as well as ones in current use. More info on encryption protocols can be found here.

All images marked as such are copyright of Kyle Cascadden (2012-2020) and are authorized for creative commons, non-commercial reproduction.