Many applications featured on the Trunked Radio Decoders article require either the 2-Level FSK interface or the 4-Level FSK interface, otherwise known as a data slicer. You must build this interface, or buy it from some of sources listed at the bottom of the page. NOTE that these interfaces DO NOT provide computer control for your scanner, but rather they interface the output from your scanner so that the computer and application can decode the digital signals.

The 2-Level Interface (also called the Hamcom interface) is required for most of the applications that are available for decoding digital signals today. There are numerous different version of this interface, but they all accomplish the same task. You can use the Hamcom Tuning Interface Application to test and adjust the performance.

Here is another schematic of the 2-Level interface based around the MAX232 chipset. This interface is very reliable and is reported to work VERY well with Trunker and Etrunker.

NOTE: Some TL081 IC's specifically the ST branded ones have the output on pin 6 instead of pin 1.

NOTE: Additional filtering is required when using utilities for LTR Decoding. The schematic may be viewed here and an updated version here

Here is a schematic of the 2-level and 4-level interface combined into one interface. It's worth noting that this circuit, as drawn, can only use one fsk decoder at a time. Since the 4-Level half of the circuit can already decode 2-Level signals, a "useful" version would allow both decoders to run simultaneously by connecting the 2-Level decoder to a second com port.

Another version of the 4-level interface with power supply can be found below: 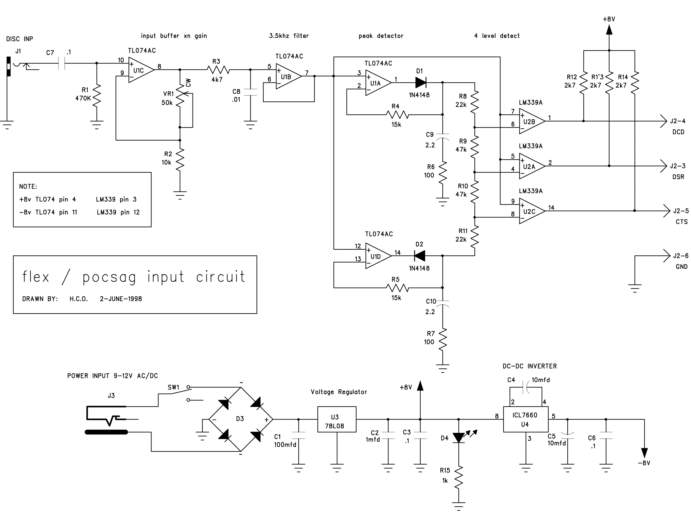