Firmware is the name given to the programs burned onto a non-volatile memory chip which comes up immediately when a device is powered on. It's the basic operating system for the main computer to understand and run all process(es) there after. On PCs this is the BIOS, which loads before your Windows, Linux, or MAC OS. On your scanner, it's the actual code which runs the scanner. It's fundamentally a map with a legend, so the scanner's little 100mhz computer knows the what, where, who, when and how to's . On any recent model of scanner, it can be upgraded or "Flashed," when newer versions come out, usually fixing bugs by the engineer refining the code, but occasionally adding new features.

The Uniden Firmware Upgrade procedure is a simple process involving a number of steps which must be followed in order (for the most part) and correctly. Many people are able to get the steps correct and perform the upgrade without incident. A few others however during each upgrade cycle run into problems--most of which can be remedied rather easily. I have therefore taken it upon myself to throw all of the problems I can think of at the upgrade process to see what error messages are generated and what the conesquences of each message are.

Prerequisites to the Troubleshooting Tips

It is not my purpose here to cover the entire upgrade process in detail but rather to begin at this point:

These errors have the following causes. These are NOT necessarily an exhaustive lists:

Error Type 2 - Something Is Not Right Here Errors 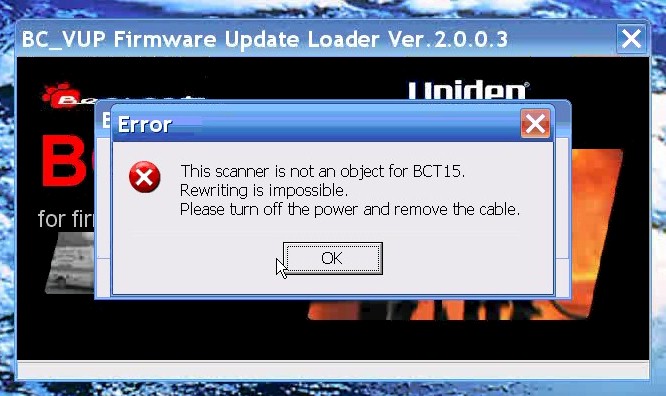 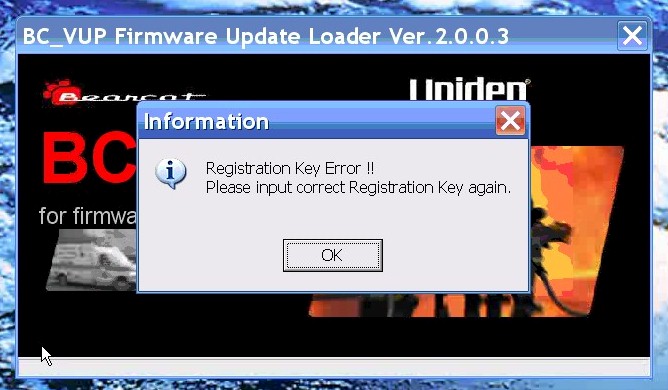 Error Type 4 - The "What’s this durn fool trying to do?" Error 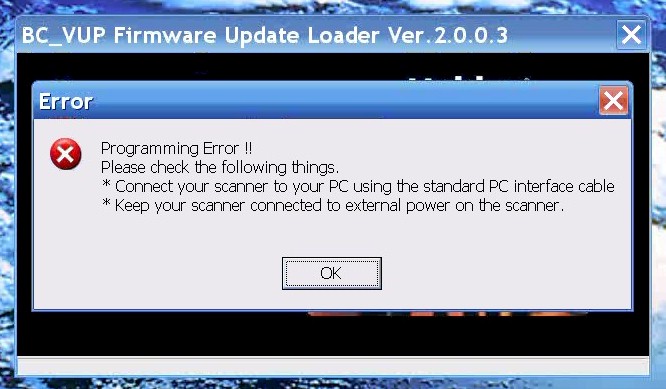 WARNING! This is a show stopper

A little discussion is in order here. A few months ago during a Major Upgrade release for the Uniden BCD996T I wanted to put my BCT15 thorough some tests to see if I could produce the dreaded "flashing screen" which is actually the dreaded blank screen flashing backlight anomaly. At that time, the only way I could reproduce that symptom was to simulate a power outage or computer crash during the upgrade process. I sent my results to that list and only got a couple of comments one of which was from Paul hoping no one else would try to duplicate my results which of course was a very good suggestion.

Today however, as I was trying to think of ways that people might get tangled up following the instructions for the upgrades, I decided to do what I would call a fairly extreme test. I decided that I would run BC_VUP, and instead of running the unzipped *.SCN file I would feed it the zipped *.SCN file. When I did that, it produced the error message shown above and when I turned the scanner off and back on, instead of the scanner (a BCT15) booting back up I got the "flashing screen." I do not know what else would generate this particular error but it appears at this point to be the error indication that results in both an abort of the BC_VUP program AND a scanner with a firmware version that is no longer usable (I replicated this error on purpose and it did it again the second time).

While it is unlikely (though definitely possible) that users have made this mistake, this would explain why some who have downloaded .SCN files that were corrupted in the process had the flashing screen episodes which were then resolved by downloading the files again and running the upgrade a second time. So it might be worth keeping in mind that just because you have always been able to upgrade without a flashing screen episode, it doesn’t mean that you might not experience one at some time. The Uniden folks could at the very least do a file extension check to make sure nothing but a file with a .SCN extension is entered. Also, if they had some checksum checking scheme on the *.SCN files that were checked before commiting to the upgrade that could be useful too.

Anyway, this makes a nice transition to...

No image for this one though I do now have a video that I shot when it occurred. When and Upgrade goes wrong to the extent that you get the flashing screen first take a deep breath. Then turn the scanner off (mobile/base units) or disconnect the power cord (portable units). Press and hold L/O and 6 and power the scanner back up. The screen should be blank and backlit. This is a good thing.

At this point, begin again at very the beginning of the official Uniden procedure and perform the steps exactly as laid out. Take your time. While it only takes a few minutes to do an upgrade, it will take longer to thorougly understand the steps and get all of the details straight if it is your first time to do it or have not done it in a while.

As I discover more ways of generating errors I plan to add to this document. If you run across something else that generates one of these errors or even a new one please let me know at don@dmascanning.com.

Hopefully this will help folks anticipate problems before they occur or give them something to refer to after the fact in order to make the upgrade as painless as possible.