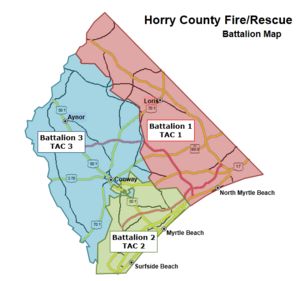 Three tac talkgroups are used by units to acknowledge calls and contact dispatch. Each tac talkgroup correspond to their respective battalion assignment.

Primary tac talkgroups are as follows:

A fireground/incident tac talkgroup will be assigned for certain operations which generally require coordination among a large number of responding units. For example, units responding to a structure fire will be assigned what's usually referred to as a "tac channel" (properly called a fireground/incident talkgroup.) Fireground operations will take place on the assigned tac channel. Dispatch does not generally monitor incident tac channels, and any time a unit needs to contact dispatch, their respective dispatch channel (tac 1-3) will be used. Other communications (coordinating attack, water shuttles, etc.) will be done on the tac channel.

Incident/Fireground tac talkgroups are as follows:

Myrtle Beach Fire Department is dispatched on talkgroup 12816 and fireground and incident coordination is on Fireground 1 or 2 (12880 and 12912 respectively). The units number are in the 600 series and Horry County Medics also cover the City of Myrtle Beach (Medic 30 and 36) and are toned out on HCFR's dispatch. Most incidents are toned out on both county and city channels due to mutual aid protocols.

North Myrtle Beach Public Safety is a hybrid agency of police and fire units. The fire units are dispatched on talkgroup 33616 by "Firecom" and coordinate incident and fireground operations on one of their 7 fireground tac channels. Most incidents are toned out on both county and city channels due to mutual aid protocols.

North Myrtle Beach Public Safety also has a list of stations (also with pictures) on their website as well.

Conway Fire Department seems to be primarily dispatched by the county and operate on the county's tac channels. However, they do have three talkgroups that are used infrequently.

Several volunteer rescue sqauds exist in Horry County. They supplement regular Fire/Rescue operations and are generally dispatched on the HCFR talkgroups. They are usually dispatched as "basic" units, rather than "medic" units, as the county's ambulances are. The following is a list of these agencies:

A list of all Horry County Fire/Rescue stations, with pictures, can be found on their website's station list.

North Myrtle Beach Public Safety also has a list of stations (also with pictures) on their website as well.

A Google-maps based map, which lists all city and county stations, has also been contributed.