Moscow City and Rural Fire and Ambulance are dispatched and respond on MFD RPT 1 (freq. 153.80). Large scale operations are typically transferred to MFD RPT 2 (freq. 153.74) to clear MFD RPT 1 for smaller incidents. The departments also utilize a Line of Sight tactical channel MFD TAC for tactical operations, typically intra-unit on wildfires (freq. 153.98). All Moscow public safety agencies are dispatched by WHITCOM in Pullman, Washington. WHITCOM signals are sent to the main repeater located on Moscow Mountain and ping off of 3 towers located within city limits. Responses follow Emergency Medical Dispatch and Emergency Fire Dispatch protocol, on an Alpha through Echo scale; with Alpha being non-emergency, Bravo being low priority emergent, Charlie being mid priority emergent, Delta being high priority emergent and Echo being an emergency with immediate threat to life. There is also an Omega response, however it is being phased out and Omega classified calls are often dispatched as an Alpha response; however both ambulance and fire respond for about 5 Omega responses per year each. Dispatch does not designate which unit will respond as members will go the the station that they are nearest to. Command staff can request specific apparatus respond, for instance the ladder ruck, or a rescue truck with the HAZMAT trailer or air trailer in tow.

There are three other Captain positions, voted by the department members, CAPT1, CAPT2 and, CAPT3, who are fire command from 5 pm to 7:30 pm weeknights. Four Battalion Chiefs cover fire command for the weekend, these positions are also voted by the members and are BATT1, BATT2, BATT3 and, BATT4. Fire command is universal for City/Rural Fire. Responding members typically go to scene via Private Owned Vehicle (POV) during the academic session, and will go to the stations for apparatus during academic breaks or to retrieve the rescue trucks or the ladder truck. Rural members typically respond to the Rural Station or Station 3 for apparatus, and do not take their POV's to scene. Fire personnel with radios are assigned individual numbers from 601 through 699 and will designate which unit they are calling in for; an example being: "Moscow, 603 to Station 1 for Engine 26." Similarly to the ambulance, tones cease when apparatus are en route or when a member calls a full crew; command staff can also request additional tones for more members and apparatus or a cease of tones. 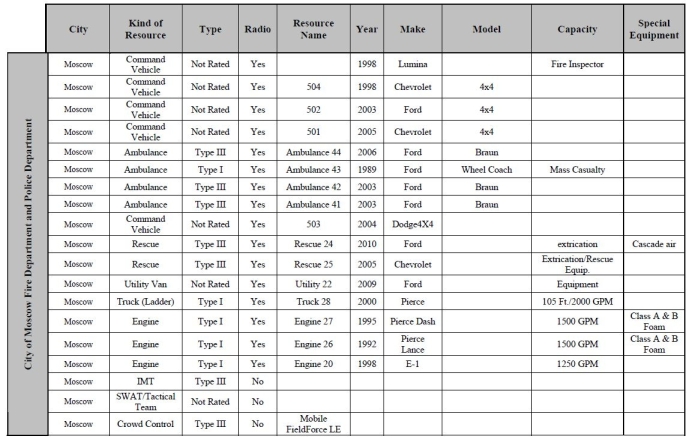