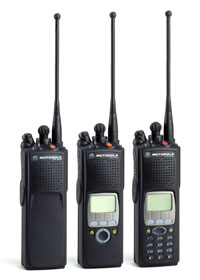 1,000 Channels are available with version 12 firmware.

870 Channels are available with version 12 firmware.

The first of the XTS series portables -- the first Jedi style portable that was digital capable.

Look for XTS-3500s by the 'truckload' to appear at hamfests.

Motorola has dropped this model and doesn't sell it any more - way early in it's planned 'lifecycle' of 12 years (it first shipped in the spring of '99).

Mot says they'll continue to support users who own this product. There's problems with it that shouldn't affect an amateur user's casual use for voice. The XTS3500 has selectable channel spacing and an XTS3500 with an IMBE flashcode can be configured to run ASTRO IMBE or analog. Batteries are the same as XTS-3000, antennae and speaker-mic. RSS is DOS based only, and is not the same that is used for the XTS3000 series of portables. While they may look alike, they are not the same beasts.

Some ham repeaters are digital capable, and any radio flashed for APCO-25 should be able to TX in analog also.