Welcome to the STARCOM21 Statewide Illinois collaboration article, a Multi-State Public Trunked Radio System located in Illinois, Iowa, United States.
This is where you, the user, may index any articles you develop for scanning related topics for this Trunked Radio System.

Starcom21 is the Statewide Motorola Project 25 TRS in Illinois for public safety radio communications. The purpose of this page is to provide supplemental information to the Radioreference.com Starcom21 page.

A former essential source for Starcom21 information is the CARMA Starcom21 profile.
This is no longer being updated, though.

Feel free to add any RIDs to the lists below, using the current format.

This may prove I have too much time on my hands, but I have taken all of the information from the CARMA profile and plotted all the transmit sites for StarCom using the "my maps" feature of Google Maps. Anyone wanting to check it out can go here: Link

A few things about the map:

Google allows anyone with a Google account to make changes to the map, however I have it set up to only allow those that I invite to make the changes. If anyone is interested in helping to maintain the map or make corrections or additions to it, send me your e-mail address and I will add your name to the list. If you notice any errors either in locations of towers or the control channels listed and don't have a Google account or don't want to mess with the map, e-mail me and I will be glad to make the corrections.

Comments, praise, and even criticisms are welcome. -Mike McGowan - K9JPM

For a printable map of tower sites, click the image below: 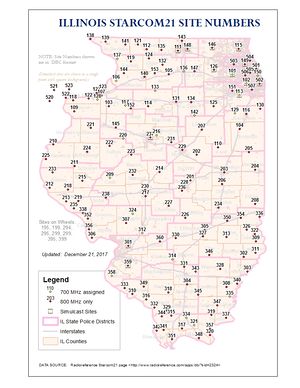