Welcome to the Tulsa International Airport (TUL) aviation article, the airport located in Tulsa County, Oklahoma.
This is where you, the user, may index any articles, frequencies-lists, etc. that you develop for scanning related topics for this airport. 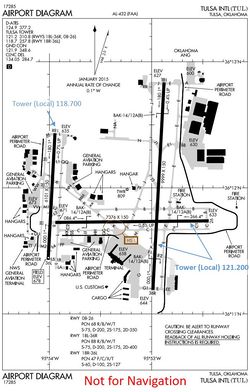 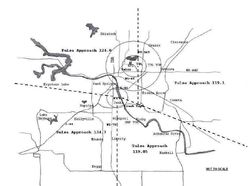 Information listed above is inconsistent between the KTUL and KRVS airport files. KTUL lists 119.85 as a final approach frequency and makes no mention of 134.70. KRVS lists 119.85 as the TRACON to the east of the airport. The information above is based off of the Tulsa Riverside Tower Pilot Information Handbook airspace map.

Further information on the Maintenance Headquarters radio use is found American Airlines Tulsa Maintenance Base. This is part of the search for frequencies.

Frontier Airlines has been granted the license WQGU734 with airline service scheduled to commence in spring 2018. The following frequency pair is a prediction based off of the license listed above

There is an ACARS remote sounding on the airport. With the following licenses associated with it: KXI5, KGP2, WQJR360, and WCJ91

For ATC services, the F-16s normally operate on the UHF air traffic control frequencies. Though the controllers will normally transmit on both VHF and UHF frequencies simultaneously, so the ATC side of the transmissions can normally be heard on VHF.

The Tulsa Airport Authority (TAA) uses OKWIN's Tulsa Site for most day to day operations. TAA is migrating from Motorola to a P25 system.