The Cleveland National Forest is the southern-most National Forest in California. Consisting of 460,000 acres, the forest offers a wide variety of terrains and recreational opportunities. On July 1st, 1908 President Theodore Roosevelt signed a declaration that created this National Forest. Now, more than 100 years later, the Cleveland National Forest provides habitat for native wildlife, as well as a natural refuge and playground for many of the 3 million plus residents in the greater San Diego area. This forest consists of mostly of chaparral, with a few riparian areas. A warm dry Mediterranean climate prevails over the Forest. A major issue on the forest is illegal immigration in the form of abandoned campfires, trash, user built trails and visitor safety. The forest has a special hand crew (non fire) whose sole purpose is the clean up the mess left behind by illegal immigrates.

The Cleveland has the smallest area of conifer (needled trees) forest (93,000 acres) of any National Forest in California and the old growth portion of it is only 3,856 acres, almost all of it Jeffrey Pine (Pinus jeffreyi).

The forest is divided into the Descanso (District 2), Palomar (District 3) and Trabuco (District 4) Ranger Districts with the Forest Supervisor's Office in Rancho Bernardo. 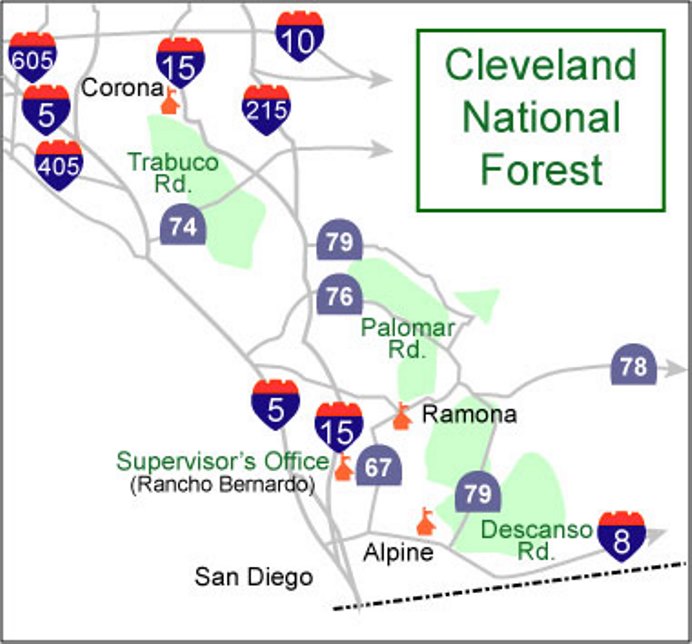 This forest has a forest net, admin net and service net. There are are no direct, or simplex, channels for these 3 nets. The number and location of remote bases is not known, but it would be safe to assume that there is one for each ranger district. There are 11 repeater sites on the forest, with Forest Net repeaters on all 11, Admin Net on 8 and Service Net on just 3. There is one tone dedicated to the operation of a portable repeater that is capable of operating on all three nets. The input or repeater selection tone is not transmitted on the repeater output frequency, rather all repeaters transmit Tone 8 (103.5) on the output.

Channel 4 is not listed on 2016 official documents.

All repeaters transmit Tone 8 - 103.5 on the output frequency.