The Klamath National Forest encompasses nearly 1.7 million acres of land straddling the California and Oregon border with the majority in California and a small portion in Oregon. The Forest is divided into two sections separated by the Shasta Valley and the I-5 corridor. In the mountains to the west, the terrain is steep and rugged and is arguably the most rugged in the Pacific Southwest Region. The east-side has the relatively gentler, rolling terrain of volcanic origin. Here the Goosenest Ranger District also administers the Butte Valley National Grassland, the only National Grassland in Region 5. With elevations ranging from 450 to 8,900 feet above sea level, the Klamath National Forest is one of America’s most biologically diverse regions. It is situated in a transitional region between the hotter and drier areas to the south and the colder, wetter climate to the north. At the California-Oregon boundary the Klamath National Forest extends into Oregon and two small areas of the Rogue River-Siskiyou National Forest extend into California. The two forests are in two different Forest Service Regions, the Pacific Southwest and the Pacific Northwest and Forest Service Regions normally follow state lines with some exceptions. In this case the boundary is following the divide between the Klamath River and the Rogue River. When Regional, National Forest and Ranger District boundaries are drawn, an attempt is made to follow drainage or hydrological boundaries. In this way two units are not managing the same watershed. The desired outcome is to have boundaries that follow topographical, hydrological and ecological lines, rather than oft arbitrary political ones.

The forest includes 5 Congressionally designated wilderness areas, Marble Mountain, Russian, Trinity Alps, Red Buttes and Siskiyou. In the lower elevations, you'll find park-like stands of Ponderosa Pines, while in the higher elevations, the Douglas fir, sub-alpine fir and mixed conifer stands beg to be explored. There are 200 miles of river system for rafting and 152 miles of wild and scenic rivers on the forest. The Forest also helps to meet local and national needs for timber, gold, and other natural resources. The forest is divided into the Oak Knoll (District 1), Happy Camp (District 2), Salmon River (District 4), Scott River (District 5) and Goosenest (District 7) Ranger Districts, with the Forest Supervisor's Office in Yreka. As of 2016, there is one district ranger for the Oak Knoll and Happy Camp Ranger Districts with the district office for the combination located in Happy Camp. The Salmon River and Scott River Ranger Districts has one district ranger who works from the district office in Fort Jones. The Klamath's Ukonom Ranger District is being administered by the Six Rivers National Forest from their Orleans Ranger District Office. 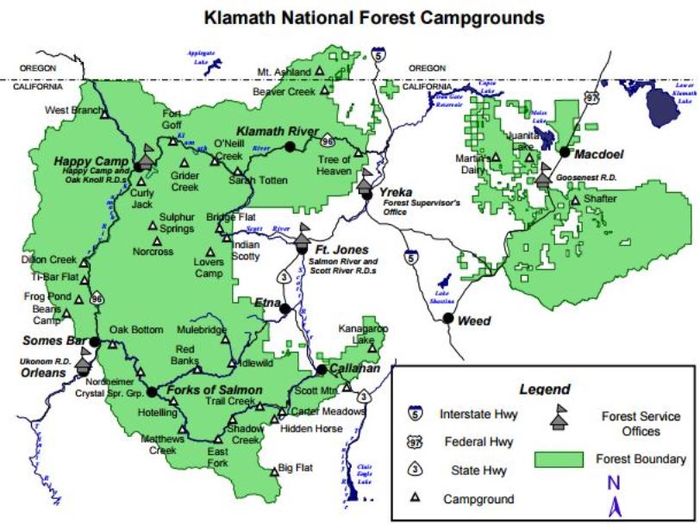 The unit identifier system for non fire personnel is unknown, but is likely to be the district number, function number and position number system. District Rangers identify with the forest number (5) followed by district number. The Yreka Interagency Dispatch Center provides dispatching services for the Klamath National Forest and is co-located with Cal Fire's Siskiyou Unit dispatch center at the Cal Fire Siskiyou Unit headquarters in Yreka. It is a 24 hour operation. The center's identifier is "Yreka".

Reflects changes made in the fall of 2015.

The input tones are not transmitted on the output frequency. The output tone of each repeater, when known, is shown in the table above. I added some output tones, and I have discrepancies (and did not change), I saw Tone 8 having a 103.5 out, and tone 12 having 179.9 out..Keith Note: only the Angeles and Klamath National Forests provide area of use descriptions for each repeater.