The 913,306 acre Mendocino National Forest straddles the eastern spur of the Coastal Mountain Range in northwestern California, just a three hour drive north of San Francisco and Sacramento. It is 65 miles long, 35 miles across and is 913,306 acres in size. First set aside as a "forest reserve" by President Roosevelt on February 6,1907, it was originally named the Stony Creek Forest Reserve and later the California National Forest on July 1, 1908. This designation proved to be confusing with relation to the state itself, and President Herbert Hoover renamed it the Mendocino National Forest on July 12, 1932. This National Forest takes its name from Mendocino County which was named for Cape Mendocino in Humboldt County. In 1542 explorer Roderiques de Cabrillo named the cape in honor of Don Antonio de Mendoza, first viceroy of New Spain.

The Mendocino National Forest is the only one of California's 18 National Forests not crossed by a paved road or highway. Elevations in the Forest range from 750 feet in the Grindstone Creek Canyon in the Sacramento Valley foothills on the Forest's eastern edge to the 8092 feet of South Yolla Bolly Mountain in the northern part of the Forest. The average elevation is about 4000 feet. 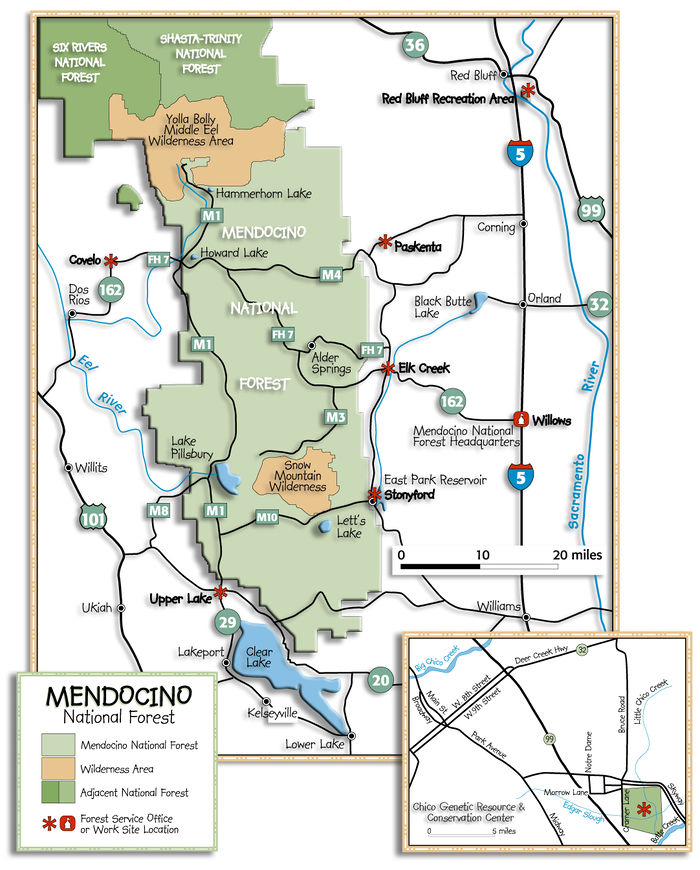 The Forest uses the function number identifier system. Identifiers of employees assigned to the Supervisor's Office begin with the number 1. The Mendocino Interagency Dispatch Center is located in the Forest Supervisor's Office. It dispatches for the Mendocino and the Sacramento River National Wildlife Refuge Complex. The Refuge Complex uses unit identifiers in the 8400 number series. The center serves as a channel or ordering point for logistics coordination with the Operations Northern California Geographical Area Coordination Center. It serves in this capacity for the Forest and Refuge Complex and for the following units it does not provide radio dispatch for: Point Reyes National Seashore, Golden Gate National Recreation Area, Hawaii Volcanoes National Park and the Round Valley Indian Reservation. The center uses the identifier of "Mendocino.".

The forest lists those repeaters to be used depending on what side of the mountain range crest the radio user is on.