The more westerly section of the forest (formerly the Trinity National Forest) is located in the eastern portions of the California Coast Ranges, with an area of 1,043,677 acres. The more easterly part of the forest (formerly the Shasta National Forest) section is located between California's Central Valley and the Shasta Valley to the north, with an area of 1,166,155 acres. This is a total of 2.1 million acres with over 6,278 miles of streams and rivers ad well as hundreds of lakes. It ranges from 1,000 in elevation (Shasta Lake and its general area) to the spectacular Mt. Shasta with its impressive elevation of 14,162 feet. The Shasta–Trinity NF lies at the intersection of the eastern Klamath Mountains and the southern Cascades and is largely forested, though at low elevations there are areas of chaparral, woodland, and grassland. At high elevations in the Trinity Alps, Eddys, and Mt. Shasta, forest gives way once again to montane chaparral, subalpine woodlands, and ultimately to alpine rock and scree. The SHF includes portions of five designated Wilderness Areas: Castle Crags, Chanchellulla, Mount Shasta, Trinity Alps and Yolla Bolly-Middle Eel. The main branch of the Trinity River is a designated Wild and Scenic River which runs through the forest. It is located within the 246,087 acre Whiskeytown-Shasta-Trinity National Recreation Area.

Congress established the Whiskeytown-Shasta-Trinity NRA on November 8, 1965. Each of the units encompasses a large reservoir (man made lake) and its surrounding natural features, habitats, and terrain. Whiskeytown NRA, managed by the National Park Service, is comprised of 42,503 acres including the 6,209-foot Shasta Bally (a mountain peak). The U.S. Forest Service manages the 203,587 acre Shasta-Trinity units. Shasta Lake is the largest man-made reservoir in California. When full, the lake has 370 miles of shoreline, which exceeds that of San Francisco Bay. Shasta Lake contains 30,000 surface acres and holds 4,550,000 acre-feet of water. Shasta Lake lies behind Shasta Dam, which is the second largest (after Grand Coulee Dam) and second tallest concrete dam (after Hoover Dam) in the United States. The Shasta Lake area includes three arms: Sacramento, McCloud, and Squaw / Pit. Each is a wonderland of scenic beauty and phenomenal outdoor recreation.

Trinity Lake, when full, has 145 miles of shoreline, contains 17,000 surface acres and holds 2,500,000 acre-feet of water. Trinity Lake Dam is one of the highest earth filled dams in the world. The Trinity Lake area can be divided into four subunits: Lewiston lake, Trinity Dam, Stuart Fork, and North Lake areas. .

The Whiskeytown-Shasta-Trinity National Recreation Area was established to manage the recreation use the lakes attract. The dams forming these lakes are a part of the greater Central Valley Project, built to provide irrigation water for both the Sacramento and San Joaquin Valleys. 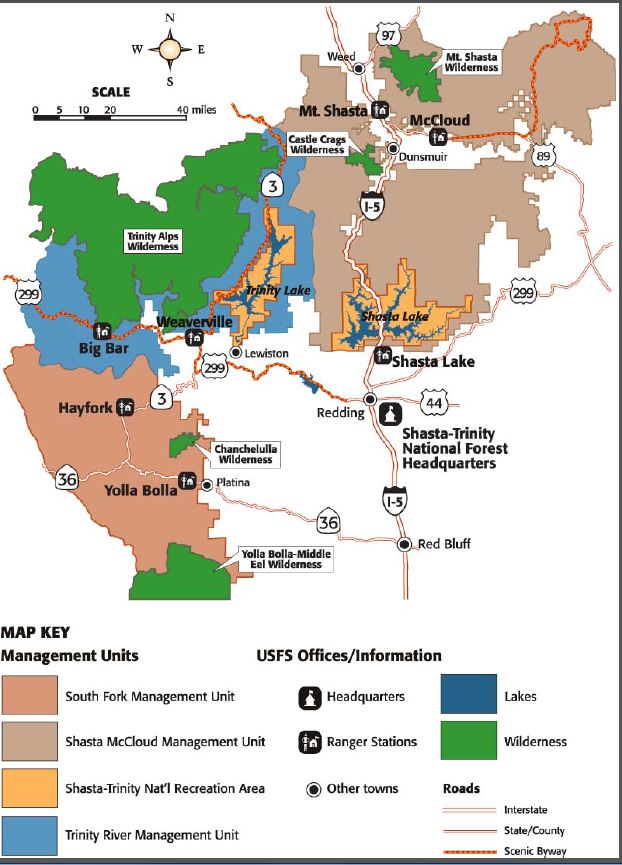 The Shasta-Trinity National Forest radio system is not like any other in Region 5. There are two nets with repeaters, the Forest Net and the Service Net. The Forest does not have a net called "admin," however, there are 4 management area simplex nets. Local reports are needed to understand how the management area nets are used. For example, is there ever any fire traffic on the management unit nets? How do field units communicate with each other when they are unable to do so on a management unit net, if at the same time, the Forest Net is saturated with fire traffic? How is the Service Net used? Other features of the forest's radio system are needed as well. Are repeaters and/or remote bases linked with microwave, UHF or some combination of such? It is also not known how many remote bases exist on the Forest and where they are located.

Tone 7 must be used on Channels 3-6 to transmit to any District Office on these frequencies.