The G-Series voice pagers are a line of receive-only, P25 capable voice pagers carried by fire, rescue, and EMS personnel to alert to emergencies. The pagers are manufactured by Unication Co., Ltd and sold worldwide, though the primary market has been the US. Sales, support, and repairs are handled through their online store and Authorized Dealers. Dealers can and do sell below MSRP and compete with each other on price and quality of support, though Unication enforces a Minimum Sales Price which if violated will result in loss of the dealer's license. Since the G1's release in 2014, Unication has aggressively targeted Motorola's paging market share in the US. Motorola's Minitor VI Two-Tone Voice Pager has not been updated since its release in early 2014. In 2015, Unication released the single-band G2 and G4 models, and dual-band G3 and G5 models. From 1991 to 2014, Unication designed and manufactured Motorola's popular Minitor III, IV, V, and VI model voice pagers.

If you're just starting out, these links are recommended reading:

Unication directs sales and first-line support through it's US authorized dealer network. The company provides software ("Uni Maintain Tool") and PC driver to its dealers for specialized updating/troubleshooting. The company's business plan relies on customers to self-update firmware, which is provided by dealers. Prior to 2022, customers could download the most recent firmware directly from Unication's website. In January 2019, the G5 received an update for Conventional DMR tier 1 and 2 only; no trunking. Per Unication rep, "No hardware change is needed. DMR is enabled by the G5 model number "67". If your model is a 64 or 66, DMR will not work no matter what firmware version you have. The current firmware V1.1 supports DMR if your G5 is a "67". We have a utility to change the model number of any G5 to a "67". Dealers will be getting the utility and instructions some time next week. After that it will be on our web site for all current G5 owners."[source] The update utility, named "FunctionUpdater(DMR Conventional)_V00-00-01_Beta01.exe", was only available via web for a few weeks. Since then the company charges $25 per unit to add DMR, requiring it be mailed back to their Dallas, TX facility to perform the model number change. 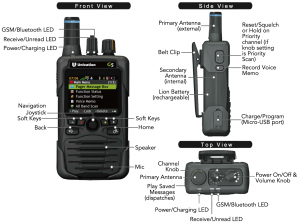 The G-Series pagers are the industry's first P25 voice pagers supporting Analog 2-Tone Conventional, P25 Conventional, and P25 Trunking Phase I & Phase II. Each pager has an external antenna; rechargeable battery; micro-USB port for charging and programming; 8 knob positions which correspond to a Zone (64 zones maximum); can monitor a mixture of up to 256 control channels or 512 analog channels (across the pager in total), but in any single knob position a maximum of either 1 trunked system or 16 conventional channels; supports up to 999 radio ID's/aliases; can alert based on TGID, QCII (2-Tone Over P25) or Call Alert; supports the AES 256-bit, DES, and ARC4 encryption standards; offers multiple scan modes (Normal, Priority, Selective, Silent, Monitor, Free Scan); offers 32 minutes of voice storage with a button on knob for quick playback; Bluetooth 2.0 for audio and Bluetooth 4.0 for data connection to phone app for PS & DRT call Ack.

The pagers are all commercial-grade IP67 rated for driving rain/dust and water submersion up to 3 feet for 30 minutes. Each pager features a 2-inch, 320x240 pixels, LCD color display with a four-direction joystick, four soft-keys, home key, and back key for navigating the pager's menus. The pager's display allows the user to change zones, scan modes, and variety of features on-the-go without connecting to a PC. For full programming of frequencies, alerting types, and customization a Windows PC running the PPS software is required. Codeplugs can be shared and downloaded for free on Unication's Codeplug Sharing webpage.

Serial Number and Model Number The G2-G5 Series pagers have two ID's assigned: a 10-character alphanumeric serial number ("MSN") and 21-character alphanumeric Model Number. The MSN is assigned at the factory and never changes. It will appear on label at rear of pager, within the pager's menus, and within PPS software at top of any screen and on tab E. The Model number corresponds to each of the possible configurations of pagers sold; there are over 120 configurations as of June 2022. When programming a pager for the first time, the user is prompted within PPS to create a new profile. Each profile is specific to the Model Number. Any profile created can be converted to another Model Number via the PPS software.

Unication sells a few accessories and a variety of third-party accessories are available from dealers or third-party websites. Official accessories include a desktop charger, amplified charger, nylon and leather cases, swivel belt clip, bluetooth headset, and screen protector. Note the Amplified Charger is the only charging product that boosts the pager's antenna strength. The amp charger has a BNC connector and boosts both internal and external antennas1. The standard desktop charger does not have an external BNC connector, does not boost antenna strength, and cannot program the pager (G2-5 series). Additional accessories for the G2-5 are discussed in the thread 3rd Party Accessories Recommendations/Reviews - Unication G2/G3/G4/G5.

On 1/20/2020 Unication provided firmware V1.40-T02J with a trunking free scan feature to a small group of beta testers[3]. Due to broad popularity, Unication invited additional users to join the closed-beta group on 5/8/2020[4]. The firmware updater will only update a pager with MSN (serial number) previously accepted into the closed-beta group. As of early 2022, a version has floated around online that allows the full firmware to be installed on any G2-G5 Series pager without being part of beta-testing group.

The v1.40 firmware is expected to be used in a yet-unreleased new Scanner product[5]. Based on public comments from Unication representatives[6], it is likely the "Trunking Free Scan" feature will not be included in any past or future firmware for G2-G5 Series pagers.

To apply for the v1.4 beta testing group, visit the Trunking Free Scan Beta Test Application Page, and complete the "Trunking Free Scan Beta Test Registration." As of Aug 2020, RR users have stated[7] there has been no reply from Unication about their applications and the closed-beta group appears to have stagnated over the past 18+ months. As of Jun 2022, the beta signup page displayed a notice

Due to popular demand, this Beta Test has already been fully booked and we will not be able to accomodate any more registration requests. Thank you for your support!

Unication has offered a few words of caution[8] before upgrading to V1.40 Free Scan Beta version.