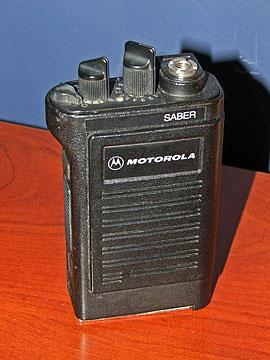 Motorola Saber I Front (without battery or antenna)

The Motorola Saber I is a 12-channel handheld radio. It represented the 'base model' of the Saber line, which is no longer produced or supported by Motorola but continues to be popular in the ham and hobbyist market, especially as many public safety users phase them out in favor of the Motorola XTS5000 and similar equipment.

The Saber supported three main bands. While the band can be determined from the model number, the sub-bandsplit cannot. (E.g., it is possible to tell whether a radio is VHF or UHF, but it is not possible to tell what split within the band it covers.)