Baltimore County's new Motorola P25 7.x system employs an RF simulcast method known as Linear Simulcast Modulation. This technology supposedly enhances a subscriber radio's ability to overcome digital simulcast multipath distortion by shaping the digital packet waveforms using CQPSK (Compatible Quadrature Phase Shifting Key) modulation. Because of this, if the digital packets arrive at a subscriber radio from multiple transmitters out of sync, the radio is able to organize them and decode them without distortion.

Because scanners are not readily prepared to capture digital packets with these modified shapings, scanners have trouble decoding the packets. This can hold true not only for voice signals, but also control channel signals. This is why you may be in a solid coverage footprint area, but not receiving the system signals in a clear manner.

The Baltimore County Fire Department is divided into three battalions. The first battalion encompass the central and northern portions of the county, and is bordered to the west by Falls Road, and to the east by Harford Road. The second battalion is the west battalion and is all points west of Falls Road. The third battalion is the east battalion and is all points east of Harford Road. Each battalion is assigned two complete sets of fire ground talk groups, allowing each incident to have a primary operations talk group, an incident command talk group, seven expansion talk groups, and an announcement call talk group. As an incident with a battalion chief is dispatched, the operations for that incident are assigned to the TAC x2 talk group for that battalion. If the incident escalates and the need for multiple tactical and IMS talk groups are needed, "command net" is instituted and the incident commander will use the TAC x1 talk group, while the incident functions can expand to the TAC x3 thru TAC x9 talk groups. Typically, operations will remain on the TAC x2 talk group, eliminating the need for the people "in the trenches" to change their radio. The announcement call talk group (AC x0) allows commanders to use regroup logic to make transmissions over all the TAC talk groups assigned to that set.

Here is a sample for the first battalion's first set of fire ground talk groups. The Bxx is the position of the talk group in the portable radio. For example, the first talk group is located in ZONE B, and knob position 12. 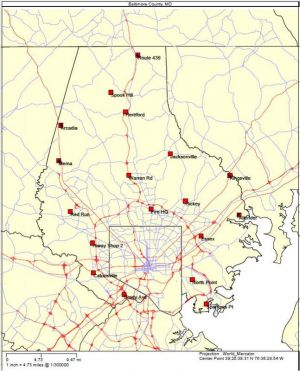 The UPGRADED Baltimore County system is a two-zone system. The reason for this is because you can only effectively simulcast from a certain number of towers before timing sync is degraded.

Your scanner (and the RRDB) refer to these zones as "sites." While typically a "site" is referring to a single tower site/transceiver location, in this case, a "site" is a group of tower sites all transmitting the same EXACT signal (known as simulcasting). With the old system, all 9 tower sites always transmitted the same exact signal -- it was a total simulcast --- therefore, scanners and radios only see the system as one "site."

With the upgraded system, there will be two "sites" or "zones" to cover the county, because, with the addition of other tower site locations, there are too many towers to have a total simulcast. The reason is very technical and beyond the scope of this post.

The main "zone" or "site" covers the majority of the county. The tower sites simulcasting the signal of this zone are as follows:

The following sites will cover the extreme northern end of the county, comprising the second "site" or zone:

To add to the fun, there are a handful of talk groups that are ONLY for the north site. These talk groups appear to be reserved for a condition called "site trunking." Site trunking is a fallback function that occurs when a remote site (such as the north site) loses contact with the system controller, causing wide area calls (calls over multiple sites) to fail. If this were to occur, users on the "detached" site would revert to talk groups specific to that site, allowing users to continue to communicate within the footprint of the site. Dispatchers may also continue to connect with the site via some sort of RF link or back-up microwave path.

Thanks to ocguard in this thread for this information