Welcome to the Fannin County collaboration article. This is where you, the user, may index any articles you develop for scanning related topics for your area.

Justice of the Peace

JP-1 thru JP-9 Justice of the Peace (The only people who can pronounce death on scene in Fannin County.)

Other Information Submitted For Fannin County

This is the general programming guide for All fire radios. There are variances for 16 channel portable radios and personally owned radios. All paging and voice dispatching is handled by the Fannin County Sheriff's office on either the North and South repeaters. These repeaters operate as a MULTI-NET radio system with both repeaters receiving and rebroadcasting the same radio traffic simultaneously. Due to Homeland Security regulation ALL Grant funded radios MUST have the National Inter-Operability channel plan. The repeater pair assigned to Ladonia Fire are used by Ladonia and Honey Grove only. Fire District pager tones see the "Fannin County Fire Paging System" section farther down this page. Since Bonham EMS do not talk on Fannin County Fire, County Fire crews will switch to Bonham EMS for medical reports. In-Bound Air Ambulances will communicate with Fire on either Bonham EMS or Fannin Fire depending on who answers first. Most Fire ground communications will be conducted on V-FIRE-21. 151.8200 (MURS-1) is designated at Mutual Aid and used for Traffic control or communications with Red Cross or other civilian services. All Fire Radio have listen only capability to the county SKYWARN repeater.

154.4150/158.9850 RM WPYN387 Fannin Co. Fire (Minitor Pagers) This is a 2 site Voice paging system which includes All Fire Departments including Honey Grove. Site-1: Ivanhoe, Site-2: Bailey. Each fire agency has its own tone as shown below: 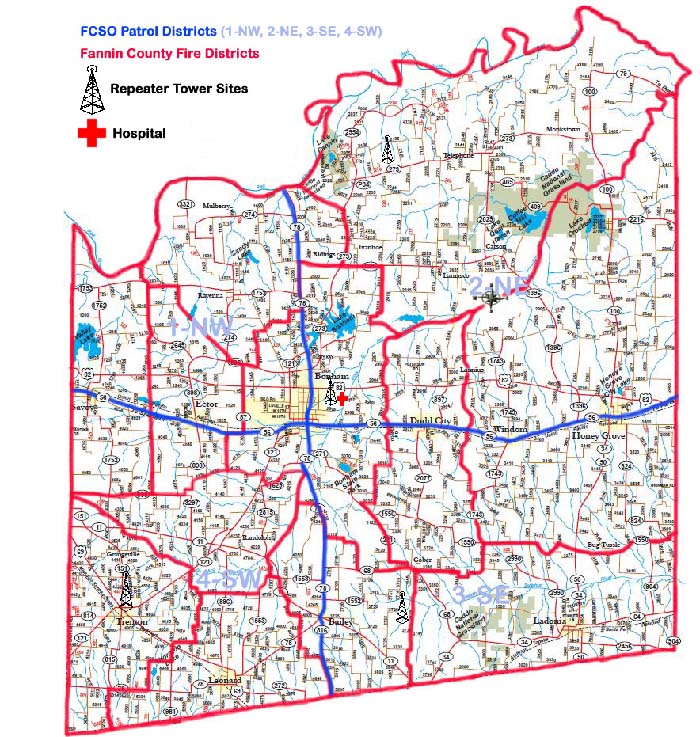 Fannin County Sheriff's office will be transitioning to Motorola APX radios. The radio system will be changing from Conventional to P25 Single frequency trunking. Future expansion will include multiple input sites around the county with single repeater rebroadcast from towers at Ivanhoe and Bailey. Bonham Police have moved to Motorola APX radios and operate on a single repeater pair. Anything considered "media Sensitive" is conducted via cellphone. Bonham PD's radio system will not change when the Counties does.