Setting PC Control on the Scanner

You must set the Baud rate of the Port on the scanner. Generally speaking, setting the fastest rate will insure the fastest transfer speed, To/From the Scanner/PC. Typically you will want to set it up 4800bps for a GPS unit, 115200bps for PC interfacing.

In all cases, The First & Second Step is to access the MENU and scroll to Settings, then:

Same as above, but skip step 1. The fastest rate these scanners can handle is 115200bps

Notes :You typically set the ports as shown directly below and it's "Highly Recommended" that you don't change this setup, as Firmware updates CANNOT be done via Rear Port, and will be used only for GPS connected devices.

A Special note of Thanks to Mark's Scanner the 'Easier to Read' Manual series for these instructions and notes, website address is

Connecting the Scanner to USB Ports

Most newer PCs have no serial ports, so you need to make the connection between the scanner and PC via an USB device.Please see our Connecting scanners via USB article for more information and tips on how to set this up properly. 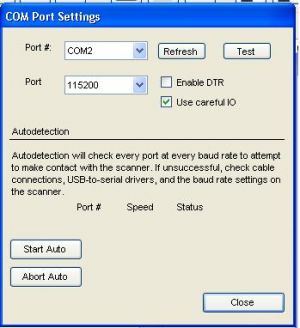 This is the screen that you would see if you had errors during downloading, uploading or in the virtual scanner mode, and had clicked on 'Setup Com Port'. There are a couple of things that can be attempted here;

Return to the FreeScan User Guide