Please see the SigIDWiki definition for HFDL for a technical description, software and additional information

A waterfall for HFDL can be found here

PC-HFDL is a Windows software to decode HFDL data traffic and has been written by Charles Brain. Just feed the HF receiver speaker's output into the soundcard of a Windows PC. It can be downloaded from the ACARS/VDL2 group on groups.io. 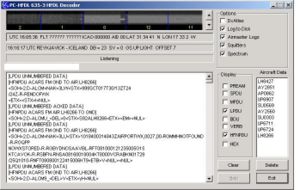 The best monitoring results will be achieved with the following PC-HFDL settings:

So in short, with all options ON except SPDU and HEX, the complete session can be seen: LOG-ON of the aircraft to the ground station giving its 24bit ICAO-ID, the assignment of the 1byte sequence ID number to the given ICAO-ID by the ground station referenced in all subsequent traffic, clear distinction of MPDU packets containing more than just one LPDU, and full traffic details.

Version 2.042 can be downloaded from this stub page