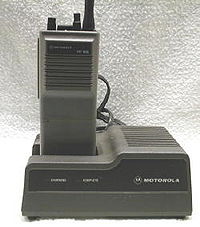 Do you have a HT600E? Well, it sounds like that may be the European model of the MT1000, and, chances are pretty good that you will need the MT1000 RSS in order to program the radio.

All of these radios are built on the same platform, that is why they are covered here.

If you have an MT1000 and wear it on your belt, you can "flip" the display orientation so that it reads correctly when you are looking down at it on your belt. All you have to do is press and hold the two channel buttons for a couple of seconds. Do the same again and it will flip back.

There are only two ways to determine the bandsplit in the radio. You can read the radio with the RSS, or open the radio and look at the split printed on the VCO board.

There are only two ways to determine the bandsplit of your MT1000. You either have to read the radio with RSS and look at it, or you have to open the radio up and read the bandsplit from the RF board (it is printed close to the lower controller connector).

Here are some useful part numbers which can be used to make a programming cable, along with some pieces from a speaker mic cable, for any of these series of radio:

If you don't have a programming cable, you can connect

Any unsuccessful cloning attempt (depending on operating condition of the radio) will result in one of the following alerts:

Out of Band Programming

Programming frequencies outside of the normal bandsplit in these radios is quite easy. All you need is a saved file and a Hex editor like Hex Workshop.

NOTE: Do not view the channel you hacked while in RSS. This will cause the program to automatically correct the out of band frequency to something inside the band limits. If you do view the hacked channel(s), all the other changes you made will have to be done over again, because you will have to reload the file from disk or re-read the radio if you want your frequencies to be there when you program the radio. So don't look at the channel(s) you changes, you won't see anything useful.

If you do want to confirm the out of band channels in the radio, there is a way. Read the codeplug into the RSS and then go back to the Main Menu. Then, hit F5 for Print/Display, and F3 to view the Abbrev list. You will be presented with a list of frequencies among other settings.

If your radio emits a continuous tone when you go to your new out of band channel, your radio is telling you that you've gone too far. The tone indicates that the VCO has become unlocked and will not operate at that frequency.

In order to convert the HT600 from 2 to 6 channels, you will need to find a program commonly called 2to6.exe. Using this program with your RIB and programming cable, it will do the software modification in the radio to make it 6 channels.

Alternatively, you can use TK (ToolKit) version 1.6 to do the same thing.

With the software conversion done, you just need to clip the channel selector stop under the knob and you are in business. Alternatively, instead of clipping the limiter, lift up the escutcheon and you will find the channel limiter can be moved to various places. Simply unstick it from the escutcheon and place it in the 6 channel place.

NOTE: We don't have a source for TK or 2to6, so don't bother asking.

In order to convert the radio from 8 to 16 channels, do the following:

P.S. Remember to clip the stop on the channel knob to allow access to the rest of the channels.

An alternative method that is supposed to work is:

Yet another method that is supposed to work is:

With unmodified RSS, ths only normal access to the S/N field is if it's empty. If you load a codeplug file from another radio, chances are it'll write in that radio's serial number! That's not so bad if you could easily change it. With these steps, you hopefully can.

Scanlist Programming for the MT1000

This is a procedure for manual SCAN list programming at MT1000. As you know, a 16ch model of MT1000 can scan 8 ch. These 8ch can be programmed with RSS software.

In MT1000 RSS you must set: USER SCAN PROGRAM to ENABLED.

There is two buttons at the left side of MT1000. Upper opens squelch. We will use lower for manual scan list programming.

Next time when you turn the switch at a top of radio into SCAN position radio will scan new programmed channels.

NOTE: The previous scan list is erased every time program mode is entered. An entire list is needed each time.

The procedure for a 99 channel radio is similar in that you enter prog mode the same way, but when you get there you start pushing the lower button again and it will step through 8 entry slots.

If there is nothing in the slot it will show 00, if there is a channel, the number will be displayed. This will cycle around every 8 button pushes.

Then you push the PTT to enter the channel in the list. If you push PTT again, it will erase and go back to 00.

When you have put the channel in, use the lower side button to find another 00 to add a channel to, or a channel to delete back to 00.

Returning the toggle out of the "Z" (scan position) will, like the rotary version, take you out of prog mode.

NOTE: The 99 channel does not erase its scan list when program mode is entered. The mode switch is used review the scan list. The green LED is used to show if that channel is in the scan list.

Here is something to try if you somehow get the wrong bandsplit programmed into the radio.

When the codeplug has invalid data, it may send out a continuous tone, from the VCO module being out of lock. To defeat this, you can try a couple of things:

Something else to try if you have a bad codeplug in your MT1000:

Clearing a MT1000 with an Invalid Codeplug, Method 2

For a UHF, it is the same, just vice-a-versa.

So, you have a radio that appears DEAD, no lights, no sound, nothing... would not write, sometimes read...

Well, then here is something to try. Open the radio, unplug the controller, and the other plug, playing with whichever would let the radio read/write by a plug/try, unplug/try method. We have heard of several radios being successfully revived in this manner.

There are 2 switches on the back of the unit. One is to toggle between the radio speaker and an external 12W speaker (UP-Radio Speaker, DOWN-12w External Speaker). The other switch is to automatically flip the display (on a 99 channel radio) when the radio is inserted, so you can read the channel right side up (only works if MVA FLIP is enabled in RSS).

FYI, you can manually flip the display on a 99 channel radio by holding the channel up and down buttons for about 2 seconds (if manual display flip is enabled in RSS).