The county is generally divided into four separate precincts as defined by Horry County Police. Each department may have their own separate zones as they choose. The precinct system divides the county into several areas that each have a set of dedicated talkgroups.

Each precinct (with the exception of the West precinct - see below) has a dispatch talkgroup, an alternate talkgroup, and a talkaround talkgroup. 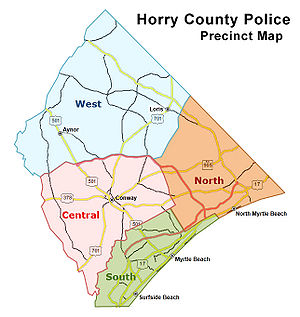 The following are the geographic police precincts:

Atlantic Beach Department is a very small department that serves the Town of Atlantic Beach. Atlantic Beach is located in the North precinct. ABPD units are dispatched on the HCPD North talkgroups (64528) using unit numbers from 925 (chief) to 929.

Atlantic Beach PD has its own set of talkgroups listed in the database, however, given the very small size of the town (about 0.2 sq. mi. or four blocks), it's not expected that they ever see any use, even during special events.

Atlantic Beach has recently seen very drastic changes to the town's governing structure, including its police department, and additional changes are likely due to the state of the town, so changes to unit numbers, hours of operation, etc. are to be expected.

Aynor PD has its own set of talkgroups listed in the database, however are not used. It is reported that they are used during the annual Aynor Harvest Hoedown, however during the 2011 festival, no use was noted on any of the dedicated Aynor Talkgroups. Rather, the communications during the festival took place on the West talkgroups, as noted above.

Aynor PD is a 24/7 full service police department which answers calls for service inside town limits. The Aynor officers very frequently assist HCPD officers around the West precinct, and vice versa, as needed.

Briarcliffe Acres is a tiny, primarily retirement-oriented, community located between North Myrtle Beach and Myrtle Beach along the coast. The police department is very small, consisting only of the Chief. Due to the size, it is impractical that radios be used. Accordingly, the Briarcliffe Acres talkgroups have remained silent.

Conway Police Department is a medium sized department that serves areas inside city limits of the City of Conway.

Conway also has its own wiki page here.

Loris officers' unit numbers begin with "L" in the format of Lxx, where xx is the officer's badge number. Unit numbers in the L50 to L60 range have been noted. Loris is a smaller department and only has a handful of officers. Example: L51, read over the air as "Loris 51" or "L51".

Loris PD has its own set of talkgroups listed in the database, however are no longer used as of Summer 2012. It's unclear if these will be used for special events or other purposes.

For information on Aynor, Atlantic Beach, Briarcliffe Acres, Loris, or Conway PDs, please see above. Other departments, including Coastal Carolina University DPS, Myrtle Beach Police Department, North Myrtle Beach Public Safety, Surfside Beach, and possibly others operate on their own set of talkgroups. Please see the database page for a full listing of each department's set of talkgroups.

The following is a summary of badge numbers used by HCPD and several other area agencies. HCPD badge numbers are not confirmed. If you have corrections to be made, feel free to edit this page or post to the South Carolina forum.

Horry County Sheriff's Office's (HCSO) operations are unique to the area. HCSO is not the primary call-responsive agency in the unincorporated areas of the county. This is a unique situation in the state. Horry County is the only county which has a county-wide police department and Sheriff's Office. Horry County Police Department is tasked with answering the vast majority of calls for service. HCSO deputies may, however, respond to calls for service, perform proactive policing, etc. at their discretion.

HCSO is responsible for all criminal warrants in unincorporated areas of the county, and routinely serves all warrants from minor offenses to high-risk searches and arrests. Deputies are also assigned to serve civil or family court papers. HCSO also operates the J. Reuben Long Detention Center (which has its own dedicated talkgroup - 304 - for internal operations) and the Horry County Government & Justice Center.

The following 10-codes are used by police departments across the county. Highway Patrol uses a separate set of 10-codes.

Horry County Police dispatch will provide suspension codes to officers making traffic stops or requesting a records check. HCPD, as well as many other departments in the state, uses the highway patrol suspension codes.