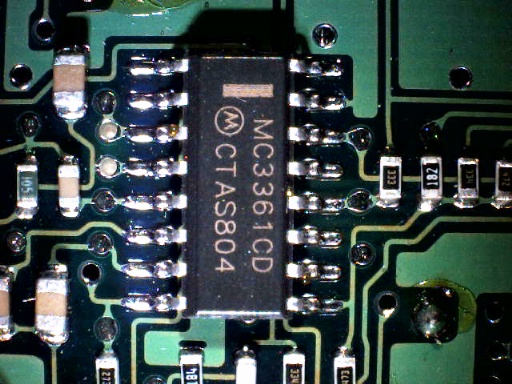 The Motorola MC3361 are a series of FM receiver chips.

The MC3361 is intended for use in a dual heterodyning receiver, also called "dual conversion". In dual conversion, a first step of electronics lowers the radio frequency (RF) input signal from the antenna to the intermediate frequency (IF). In the second step, the IF signal just produced is demodulated and audio frequency (AF) output is produced.

The MC3361 is able to perform the second step of dual conversion, the demodulation from IF to AF. Although the signal produced at pin 9 is termed "audio frequency," the electrical signals output can extend well beyond the range of human hearing, to approximately 200kHz. Many of the higher-frequency signals are spurious signals generated by the signal mixing performed during demodulation. For connection to an actual audio output, such as a headphone jack, this signal is heavily filtered.

For this reason, those who wish to monitor trunked radio systems sometimes retrofit scanners with "discriminator taps" that provide this useful baseband audio signal at a jack on the case of the scanner.