Welcome to the Pike County, Ohio collaboration article. This is where you, the user, may index any articles you develop for scanning related topics for your area.

Pike County is located in the Appalachian foothills region of southern Ohio. It was formed from parts of Scioto, Ross and Adams counties on February 1, 1815. It is named for famed explorer and soldier, Zebulon Pike.

The Village of Waverly is the county seat. There are three villages and fourteen townships in the county along with several unincorporated areas. 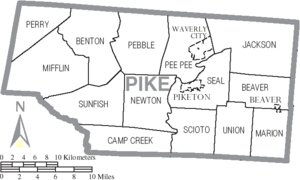 Map of Pike County, Ohio With Municipal and Township Labels

Pike County is served by OSP Post 71 Chillicothe. All communications use the Ohio MARCS statewide system.