Please do not edit this review. It is the author's own work

I had my first chance to listen to a Pro-96 and decided to do a quick comparison to the BCD396T. The BCD396T is mine; the Pro-96 is borrowed from a friend. Both are excellent digital scanners and should make anyone proud to own either one. 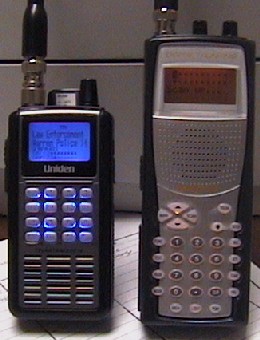 Before receiving the Pro-96, I was thinking that this would be some sort of HUGE brick type scanner. Big, heavy, and awkward to hold and operate. I was wrong. The Pro-96 isn't nearly as big as I had pictured, but is bigger than the BCD396T. Both seem to have about the same weight. The 96 is comfortable to hold and operates with ease (once the programming is done.) I really can't give a first impression of the Pro-96 without comparing it to the BCD396T.

Purchasing New. If purchasing either of these new, expect to pay $500 +. But keep in mind that the BCD396T comes with the free programming/control software, programming cable, rechargeable batteries, belt clip, antenna, AC adapter, BNC to SMA adapter, manual, and wrist strap. The Pro-96 comes with antenna, manual, belt clip, and 1 black and 1 yellow battery holder (no batteries included). One battery holder is for rechargeable and the other for regular alkaline batteries. The BCD396T simply has a switch inside the battery compartment to switch between alkaline and rechargeable. If you wanted the AC adapter, software, and programming cable for your Pro-96, you can expect to pay $50 to $60 more for those accessories. Keep in mind that the Pro-96 cannot trunktrack 700 MHz systems at this time, whereas the BCD396T can.

Antenna Type. The Pro-96 has a BNC type antenna connector versus the BCD396T's SMA adapter. I prefer the BNC on the 96 over the 396's SMA. But that is a personal preference. The BNC makes switching antennas quick and easy whereas the SMA is more cumbersome to me and I get frustrated trying to change antennas. The backlight on the BCD396T stands out, even in day light. Both scanners have bright backlights at night but the 396 has a super bright blue light that is cool, but also sometimes can be annoying in the vehicle. Almost too bright. I wish it were able to be dimmed on the 396. The Pro-96's light is a softer type light and easier on the eyes, especially in the dark.

Size, size, size. The 396 is the perfect size to me. I carry it around with me where ever I go; work, in the vehicle, to the store, etc. because it is so portable. The 96, though not too large, it is bigger than the 396 and having gotten used to the size of the 396, I don't think I would want the 96 as my primary do all scanner. But the 96 is much smaller than I anticipated. Only slightly larger than the Pro-97.

Audio: A lot of people will disagree with me, but I just can't tell much of a difference here in this area. Each scanner sounds the same to me on VHF-High analog, 800 analog, 800 digital and all other bands. This is a close tie. The AGC performs better on the 96, no doubt. But the audio quality and audio level is near equal on the systems I monitored. When AGC is on the pro-96 sounds like it is underwater to me. But it helps level the audio. I turned it off and could live with the very minor audio differences. The Pro-96's audio does get louder than the BCD396Ts.

Programming by hand. To me, the Pro-96 is somewhat difficult to program compared to the 396. This is talking about programming by hand only. Entering a frequency or setting up a Motorola Trunking system on the BCD396T is fairly simple and self explanatory because of the menu system it has. The 96 has a confusing array of buttons you have to push to get to programming the right mode, etc. I just find it easier to program the 396, but again this is preference on my part. Entering text on the 96 is a real pain. Having to press the corresponding key, then press another key to select the letter. Then if you want lower case you have to push another button. Too many buttons to push for my preference. When programming large systems it gets redundant and frustrating. Entering text on the 396 is easier simply by rotating the volume knob.

Software. Each has it's own programming software. Win96 software is an excellent programming software, and can "unlock" certain features of the Pro-96, like the Mil Air band. However the Pro-96 can not be computer controlled where the BCD396T can if that is something you are interested in. I don't use computer control so that would not affect my decision. The BCD396T has a couple of programming options. The free software from Uniden, UASD396. And ARC396 from butel.

Alpha (Text) Tags. The BCD396T allows up to 16 characters for text taggs or alpha tags. The Pro-96 only allows for 12. But, the Pro-96 displays the TGID/Frequency and the Text tag where the 396 either shows one or the other.

Memory. The Pro-96 has what is known as V-Folders. I didn't get a chance to use these but I can definitely see how they would be beneficial. You can choose from 11 V-Folders which are actually 11 pages of 500 channels of memory which gives you 5500 channels total on the scanner. You can only use 1 V-Folder at a time, but setting up various folders for different areas you may travel to could be a real benefit. The BCD396T has systems and groups. You have access to all 6000 channels without having to change folders on the scanner. I prefer the 6000 channels to the V-Folders myself.

Reception. Just a quick side by side comparison easily shows that the Pro-96 is better than the BCD396T in the reception area. The Pro-96 was picking up a wide range of signals from VHF-High to 800 MHz systems at various distances while the BCD396T would scan right on by the exact same systems and never stop using the same type antenna.

Problems? The BCD396T definitely has issues with its AGC (at the time of this review). It just doesn't work. The Pro-96's AGC shines, it works very well. The Pro-96 (older versions) had CPU problems. Versions 1.1 and 1.2 had some type of TGID problems and had to be sent in to be upgraded to the CPU 1.3. There is now a 1.4 upgrade but it is only available to the newer scanners and isn't supposed to be any noticeable difference to the user of 1.3 and 1.4 CPUs. To check you CPU version, simply press 3 during the welcome screen when you turn the scanner on. It will display the following or similar: CPU: F1.4DSP-APP: F1.2DSP-Voc: F1.0

Other items: I really like that the Pro-96 has independent squelch and volume knobs. Easily adjusted without having to push a combination of buttons. The 396 is a little awkward when trying to adjust the squelch on the go. And the 396's squelch doesn't seem to work. I have mine set to 1 or 15, I get the same result. The Pro-96's squelch seems to block out weaker signals or let them in if you adjust it. The 396 seems to be a little more top heavy and prone to falling over. The Pro-96 is very stable sitting on the desk. Both scanners have the Weather Alert Priority and SAME features. The BCD396T has a wider range of delay, alert, and hold options per channel.

Banks vs. Systems. Having only 50 channels per bank could really get frustrating on large systems or trying to include an entire county or parish on one bank. The Systems/Groups setup on the BCD396T is much more versatile. Having multiple trunking systems on the same scanner and not being limited to just 10, is definitely a plus for the 396. However, this is where the V-Folders step in and level the field. You could just program the most local agencies, then if traveling outside you normal area, simply pull up the programmed V-Folder. So this is just a preference type call here.

My Conclusion. Many people swear by the 96 and it's audio. The Pro-96 is a great scanner with cool features like the V-Folders. But for the money, if I had to buy only one scanner, I would have to go with the BCD396T. Simply because it has the most features, it comes with everything in the box and it will be continuously supported by Uniden with firmware upgrades as needed. If feature rich is what you are after, the BCD396T is for you. If sheer performance is your cup of tea, then I suggest the Pro-96. 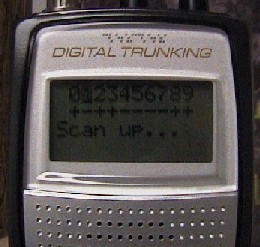 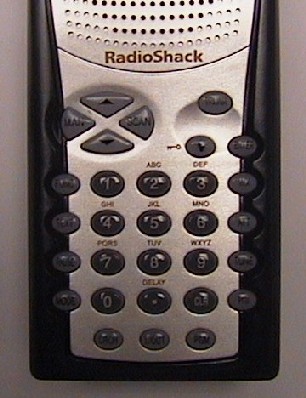 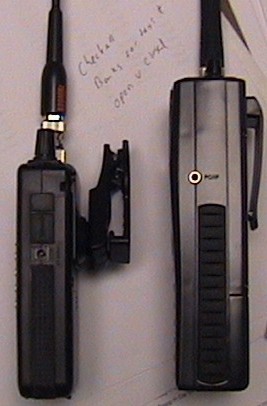