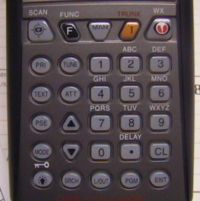 RESPONSE FROM RADIO SHACK 12/2006
RadioShack is continually staying abreast of the 800MHz rebanding program. We consult with industry experts regularly and are keeping a close eye on the progress of the entire rebanding effort. Since complete details of the rebanding protocol are not yet available it is now obvious that no one can confirm for certain that any scanner can be updated or adapted after rebanding. Once the first fully rebanded systems are activated we will be in a much better position to assess the impact on our 800 MHz scanning receivers.

While in Fine Tune Mode, press the "mode" key to cycle between CT (CTCSS), DC (DCS), AM and FM. If CT or DC is selected, the bottom line will display the decoded tone if one is transmitted. The function is identical to setting a channel as CT or DC, but this does not save the frequency in a channel/bank.