After you get your radio, you're next question is likely to be 'what else do I need to hear something on shortwave'. The answer is greatly dependent on many factors. If you are using a portable, the whip antenna will get you started, but generally speaking, that's about it. On HF, these small whips are very inefficient, and would likely capture the stronger signals, but not anything much weaker. Using a desktop, you will need some sort of antenna to hear anything at all. 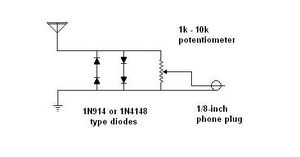 These radios are designed to work with the relatively small input that a whip antenna would supply; in many cases, putting a substantial antenna on them would cause more grief in the form of overloading than it's worth. Sometimes an extendable whip will help, but you may find you will need to fiddle a bit with the length to get it right.

In most cases, a small hunk of wire - 20 or 30 foot or so - attached to an appropriate plug into the antenna jack on the side of the radio (if it has one) will do. Try to avoid clipping anything directly to the whip (although that will do in a pinch). Any static charges that might build up would likely damage the radio if discharged into the whip. To avoid that same issue with the antenna jack, you can build a small box with some inexpensive diodes which would blow in the case a static charge were encountered. The diagram shown on the right includes a small variable resistor (potentiometer) that would serve as a crude RF gain control so you can reduce the level of the signal if needed.

If you live in an urban area with lots of MW, TV or FM stations nearby, you may find that this circuit actually causes hash, overloading and other issues. The problem is the diodes - under certain conditions, they may rectify a large RF signal and cause issues. You may substitute something else in their place, such as a small gas discharge tube, or even an old flashlight bulb will work. See the Static Drain for Outside Long Wire Thread for additional ideas.

A better solution is a small portable loop Unfortunately the widely acknowledged champ in this field has long since been discontinued and is hard to find: the Sony AN-LP1. However you're not out of options; see the DoxyTronics magnetic loop or this magnetic loop from eBay. such passive (uses no amplifier) antennas need to be tuned; this is a significant advantage if you live in an urban area with a lot of MW, FM and/or TV stations around, as this tuning will help reject unwanted signals. Our Loops article has more such antennas; some active, some not.

Before you erect anything, survey your property carefully. If the antenna should get knocked down in a storm, will it fall over a power or telephone line? If it would, then find another spot. Remember, safety first.

Every home has appliances in it that generates noise; noise is the bane of the HFer. Ideally, you would want to mount your antenna far enough away from the house to avoid this problem.

The most basic form of the antenna is the inverted L or random length (many folks would call this a 'long wire' - that term should be avoided, as that describes a very different type of antenna). See the article from MT here for a description. This antenna is very broad banded, and easy to construct. Some folks have used coaxial cable as the lead in to help shield against noise pickup.

A very popular antenna for folks just getting started is the Par EF-SWL end fed. This antenna comes pre assembled - all you need to do is to supply the coax (and waterproofing for the feedline connection), and you're good to go. The wire can be mounted in numerous different configurations, and the included transformer will help with noise reduction. The transformer has several connections - you must experiment with them to see which one works the best for your environment. The reviews on this antenna are all superb - just don't try transmitting with one! This antenna is available from numerous suppliers including Universal Radio in Ohio.

If you are interested in certain bands, the basic dipole will work well. Be sure to mount it at a height at least 1/4 wavelength from the ground for best results. To find this height, use the standard formula 234/f(mhz) where f(mhz) is the desired frequency in megahertz. Dipoles will also work well on their odd harmonics - so a 3 mhz dipole would work very well on 9 mhz, a 4 mhz dipole would work well on 12, and so on. It is described here.

If your available space is limited, or you need to be more stealthy because of HOA restrictions, the W6LVP loops are a great choice. The owner's customer service is second to none, and his loops have garnered wide acceptance for being affordable and good performers. Always keep in mind that with loops, you must use them to make a signal more readable, not necessarily stronger. Gain is not the advantage here; loops are great at rejecting noise sources and, on MW and LW frequencies, many can be turned to null out interfering stations. For European listeners, the Wellbrook antennas are very much the standard bearer of loops. They have also been reviewed in the World Radio TV Handbook.

But I cant put anything outdoors

Anything you put indoors on HF is a compromise. You will have trouble trying to keep from hearing noise sources in the home, you may be constrained as to how much antenna you can put up, home convenants prevent you from putting anything outside - these are just some of the issues.

Active antennas have long been touted as a solution. However, most people don't take the time to learn how to use them properly. We have an article describing active antennas and some of their pitfalls here. If you end up using an active antenna, take the time to try to find a quiet spot in your home where the noise seems to be lowest. Most homes have such places, but it takes hunting to find it. Use an old AM portable (even an old Walkman will do) tuned to an empty AM channel and walk around your home. It's also worthwhile to take the time to read reviews on active antennas, and see which ones would be good for your application. Check out the HF Antennas wiki for links to reviews.

There are many passive (not amplified) designs that folks have come up with over the years. While they will not perform better than their outdoor cousins, they work well enough to hear some of the weaker and harder to hear stations. Our HF Antennas wiki has links to designs and reviews.

Loops are another very good choice for indoor use. Loops (including the DoxyTronics magnetic loop) will work just as well with a desktop as they do with a portable. In addition, if you have some skills with construction, a Carpet Loop is a design worth considering. The advantage here is that you can make the loop element as big as you want (it used 4 or 5 conductor cable which can be placed around the perimeter of a room). We also have an article on building your own receiving loop here. Even the W6LVP loops (mentioned earlier) can be placed indoors, but doing so does reduce its effectiveness in reducing noise and nulling stations.

Using the attic or crawlspace is a very good idea. It doesn't remove the antenna from the noise sources, but it is sometimes more convienient. You won't have to contend with moving furniture or carpeting, and you might be able to bend the antenna around corners to make it work. Bending a receive antenna generally doesn't adversly effect it all that much; try to avoid bending the antenna back on itself, as that can sometimes cancel a signal out.