Welcome to the Blue Angels Pensacola NAS Homecoming and Beach Airshows aviation article, the Naval Air Station located in Escambia County, Florida.
This is where you, the user, may index any articles, frequencies-lists, etc. that you develop for scanning related topics for this Naval Air Station. 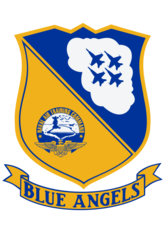 Pensacola is proud to call itself home to the Blue Angels, officially known as the United States Navy Flight Demonstration Squadron. The "Blues" perform two "official" shows per year in the Pensacola Area. The first during July and their final show of every season in November, known as their "Homecoming" show.

The Museum of Naval Aviation at NAS Pensacola has a viewing area for visitors to watch the team practice. The team visits the museum to answer questions and sign autographs after Wednesday practices.

At 11:30 a.m. on most Tuesday and Wednesday mornings during the March - November show season the Blues conduct full practice shows at NAS Pensacola, weather permitting. They have also been known to make surprise visits over Pensacola Beach at Casino Beach. So if you are going to the Naval Aviation Museum or Pensacola Beach don't forget to bring your scanner.

Within just a few days of the final, official, "homecoming" show at Pensacola, off season practice begins in the Blues R2908 Restricted Airspace just offshore of Fort Morgan and Gulf Shores Alabama. Weather permitting, daily practices are held in this airspace for familiarizing the newly arriving pilots, and the previous seasons team members into their new flight duties. These practices continue until the team departs for El Centro, California, for the full winter practice "season" in January. This space was also used extensively for re-qualifying the team during the 2011 season's safety stand down period.