BudaPD officially took over patrol responsibilities from HaysSO on October 20th, 2010. They are currently being dispatched by the HaysSO on their talkgroup (HaysSO Disp 1 0777), though might eventually contract with the City of Kyle dispatch center. There are 9 commissioned officers at this moment, staffed with 4 patrol vehicles, and two unmarked vehicles.

I believe Hays County Sheriff's Office might be dispatching deputies by MDT (which they refer to as "paging"). Units are calling with "received page." I'm not sure that this is a pager, as fire units would have. 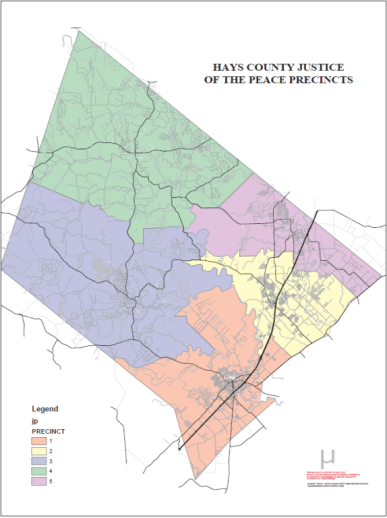 There are 5 Precincts as shown in the map.

San Marcos Police has 94 officers on 3 shifts, Day, Evening and Midnight, each shift containing 2 platoons, an A and B. Each platoon consists of about 11-14 officers with 2 sergeants per platoon. San Marcos Police has a downtown foot patrol (mostly on Thursday through Sunday nights), a bicycle patrol (both downtown and at the Outlet Malls), and a motorcycle unit (3). The city is divided in to 5 beats (Adam, Baker, Charlie, David & Edward). Adam 1 being the Day Shift in Adam district, Charlie 3 being a Midnight shift in Charlie district. Extras in a district add a number to the end of their call, ex: David 3-1 (three-one). I've found that any officer (of any rank) will work a beat, so it wouldn't be rare if SMPD Cmdr. 102, worked the Edward 3 shift.