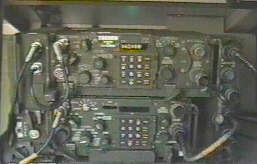 SINCGARS is a new family of VHF-FM combat net radios which provides the primary means of command and control for Infantry, Armor and Artillery Units. SINCGARS is designed on a modular basis to achieve maximum commonality among the various ground and airborne system configurations. A common Receiver Transmitter (RT) is used in the manpack and all vehicular configurations. SINCGARS family of radios has the capability to transmit and receive voice, tactical data and record traffic messages and is consistent with NATO interoperability requirements. The system operates on any of the 2320 channels between 30-88 megahertz and is designed to survive in a nuclear environment. COMSEC for the basic radio is provided by use of the VINSON device. An Integrated COMSEC (ICOM) version of the SINCGARS is currently in production. SINCGARS is operable in a hostile environment through use of Electronic Counter Countermeasure (ECCM). SINCGARS replaces the current standard manpack and vehicular radios, AN/PRC-77 and AN/VRC-12 family, respectively. An airborne version of the SINCGARS radio is in production and will replace the currently standard aircraft radios, AN/ARC-114 and AN/ARC-131.

The Single Channel Ground and Airborne Radio System (SINCGARS) provides commanders with a highly reliable, secure, easily maintained Combat Net Radio (CNR) that has both voice and data handling capability in support of command and control operations. SINCGARS, with the Internet Controller, provides the communications link for Task Force XXI. SINCGARS configurations include manpack, vehicular (both low and high power), and airborne models. Communications Security (COMSEC) is integrated in currently produced versions of the ground and the airborne radios, and the System Improvement Program (SIP) models providing upgrades to enhance operational capability in the tactical internet (TI) environment, and the Advanced System Improvement Program (ASIP) models that are of a reduced size and weight provide further enhancements to operational capability in the TI environment.

These radios will provide improved data capability, improved forward error correction for low speed data modes, and a Global Position System interface and Internet Controller which allows SINCGARS to interface with EPLRS and Battlefield Functional Area host computers. The ground radio acquisition strategy was revised in October 1996 from dual to single source commencing with the FY97 acquisition and continuing through completion of the program for the balance of the ground radio major components. ITT won the down selection competition with GDLS. The program office has fielded more than 136,000 radios to the training base and Army units worldwide.