Welcome to the Licking County, Ohio collaboration article. This is where you, the user, may index any articles you develop for scanning related topics for your area.

All tones use standard 1 second/3 second timing except for Monroe Township and the Licking County All Call (8 seconds). 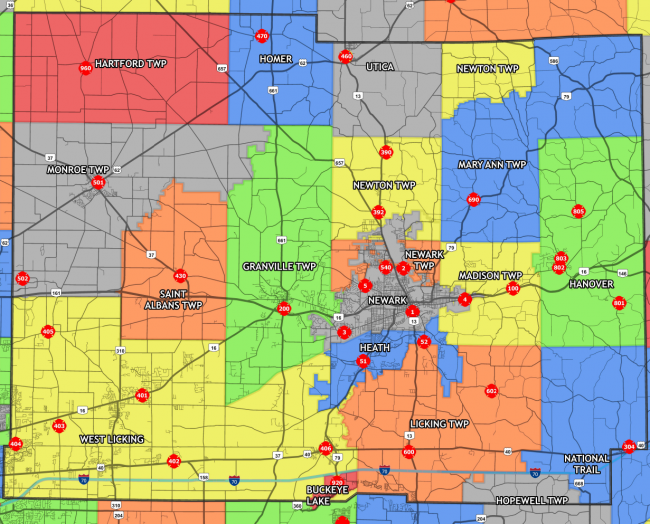 Fire/EMS departments in Licking County have moved almost entirely to plain language, although some remnants of BSSA codes and signals remain, such as 16 (death) and 44 (responder down). Also "10-22", the former Newark Fire Department code for PD, is occassionaly used to discretely request law enforcement response. "Priority 1" is used for lights and sirens response. "Priority 2" is used for non-emergency response. "Signal O" (possibly from Columbus Division of Fire) is sometimes used to indicate all units have cleared a scene.

Most departments in Licking County use Buckeye State Sheriffs Association codes and signals to some degree. In addition, some use "Priority 1" for emergency response (lights and sirens), "Priority 2" for regular response, and "Point 19" for drunk drivers.

The Licking County Emergency Management Agency operates on 155.775 (103.5 PL). A roll call is held every Wednesday at 9:00pm. Tornado sirens are activated on this frequency using a series of DTMF tones.

Heath public works (Street Department, Water Department, and Wastewater Department) were formerly on the (now defunct) Heath trunking system. They retain 858.2125, although this channel is rarely used except for snow removal and communications between public works departments and the Heath Police Department. The channel is also shared with the Police department, which uses it as a special event/tactical channel. Licking County is in ODOT district 5. The district headquarters is in Jacksontown in Licking Township.

There are three telephone companies in Licking County. Windstream and CenturyLink serve most of the county. AT&T has a very small service area in the Southeastern part of the county.

Unconfirmed frequencies from the FCC Database

Refresh this page from the latest database entry