Training Air Wing FIVE is located 5 miles north of Milton, Florida on board Naval Air Station Whiting Field. The wing is comprised of three primary fixed-wing and three advanced helicopter squadrons and trains aviators from the Navy, Marine Corps, Coast Guard, Air Force, and allied nations. TRAWING FIVE is responsible for an estimated 43 percent of the Chief of Naval Air Training Command's total flight time and over 11 percent of Navy and Marine Corps' flight time world-wide. Over 1,200 personnel complete their essential flight training here annually. We pride ourselves on producing the finest Naval Aviators in the world. 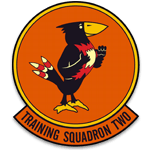 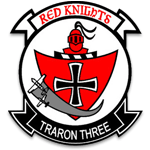 Training Squadron Three (VT-3) was commissioned on May 1, 1960, at South Whiting Field. Its primary mission at the time was to instruct student Naval Aviators in radio instruments, formation flying, and air-to-air gunnery. The primary aircraft at that time was the T-28 Trojan. Air-to-air gunner was discontinued in January 1965 and familiarization and basic instrument training was added in its place. In 1973, VT-3 moved to its present location at North Whiting Field.

In 1980, VT-3 became one of the few commands selected to be alternately commanded by a Navy or Marine Corps officer. The Red Knights were honored again in 1994 when they became the Navy's first and only joint primary flight training squadron. The first Air Force instructors reported in February 1994 and the first Air Force students followed in July of that same year. VT-3 now alternates Navy and Air Force commanding officers. 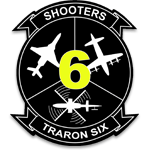 Training Squadron SIX (VT-6) was initially established in 1956 and re-designated as VT-6 in May 1960. The squadron provides primary flight training to selected Student Naval Aviators (SNAs). Since its inception, VT-6 has flown a wide variety of naval training aircraft to include the TC-45, T-28, T-34, and now the T-6B. The squadron serves as an indoctrination point for Naval Aviation and takes pride in building professional U.S and International Aviators.