Macoupin County is the 4th largest county, by area, in the state of Illinois. It also comprises 2 area codes and is perhaps the only county in the United States that has 3 or more LATAs (Telephone Exchange Boundaries). The Enhanced 911 system in the county took over 10 years to get online. 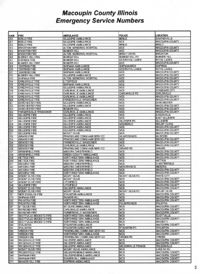 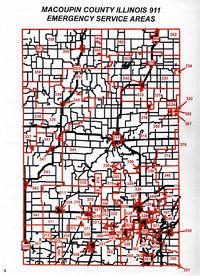 Carlinville Tower (911/Sheriff/Local Government/Highway Department repeaters) The repeater has very good coverage (including portables), with remote receive & transmitter sites, into all surrounding counties and into the city of Springfield. This repeater system is a voting system, you may hear multiple responses (on the 46x MHz links) from mobiles on the receiving towers back to the 911 tower to be voted on to go out on 154.7475 R.

Paging is done from the repeater site or one of the remote towers nearest the agency they are paging.: