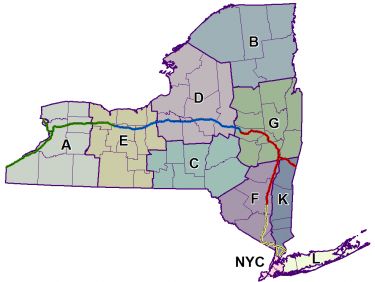 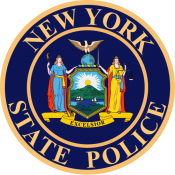 X=Troop letter
#=1 through 4 (except for troops lacking a fourth zone, Headquarters, and Troop NYC)

1: Does not apply to Headquarters or Academy (see dedicated wiki page), does not seem to apply to Troop NYC. It seems some troops have additional numbering blocks, such as 300 and 400, but these have only been observed with Troop D.
2: Units include non-zone Commercial Vehicle Enforcement, drone units, haz-mat, SCUBA Emergency Management, non-zone Bomb Disposal Units, school resource officers, utility units, non-patrol command units, and more.
3: Does not apply to Headquarters or Troop NYC.
4: Only applies to some troops.
5: Some exceptions, mainly for task force units, some other special units. Includes supervisors if troop does not use the #X1-#X9 range.
6: Typically includes Commercial Vehicle Enforcement, Bomb Disposal Units, traffic enforcement units, and sometimes patrol units.
7: The latter 80 call signs have been typically been reserved for traffic enforcement since the 1980s. Chevrolet Camaros were always numbered as were usually numbered #X87 and #X88, and while the Camaros are gone, many troops still reserve the range for traffic enforcement. If it is not a traffic enforcement unit, the range is usually out of service. None of this applies to Troop T, which use the range for special units, such as canine units.
8: Includes patrol units, supervisors, and some special units. See dedicated wiki page.
9: Some troops give dispatchers five digit call signs in the 9X#00-9X#99 range. The "#" designates the dispatcher's zone, if the number is "0," it designates a troop headquarters dispatcher). There may be some exceptions to the 9X1-9X99 format, but this remains unclear.
10: May identify as MRT1 through MRT6. This remains unclear.
11: Designates area of the state, not NYSP troop. Non-NYSP units marked with an "X" use the same designator as the local NYSP troop.
12: Likely outdated. Many task force units use the local troop letter.
13: Likely outdated.