Established by proclamation on May 25, 1907 by President Teddy Roosevelt covering 221,324 acres along the river along the Owens River. First established to secure the water interests of the City of Los Angeles, the Inyo National Forest has been expanded and contracted at least four times since its creation. Most of the original lands designated as the Inyo National Forest are no longer part of the Forest and are now owned by the Los Angeles Department of Water and Power. These lands were later returned to the public domain and portions of the Sierra National Forest, east of the Sierra crest as well as the White-Inyo Mountains, were designated as the Inyo National Forest. The forest now covers 2 million acres. The Inyo National Forest extends 165 miles from Conway Summit in the north and to the Kern Plateau in the south. The Inyo has over 10,500 feet of elevation difference, from 3,900 feet near Owens Lake to 14,494 on the peak of Mt. Whitney, highest peak in the continental United States.

The Forest includes the Mono Lake National Forest Scenic Area, Boundary Peak - the highest peak in the State of Nevada at 13,140 feet, the world's largest Jeffrey Pine Forest located east of Mammoth Lakes and south of Mono Lake, 2 Wild & Scenic Rivers, 5 Visitor Centers, 3 Scenic Byways, 2 Alpine Ski Areas and 1 Nordic Ski Center. The western hemisphere's oldest non-clonal tree, which so far remains nameless, is a 5,070 year old (as of 2020) Bristlecone Pine growing in the Ancient Bristlecone Pine Forest atop the White Mountains. The Inyo has 9 Congressionally designated Wilderness Areas covering more than 800,000 acres. Among them is the John Muir Wilderness, which receives the most visitor use per acre, per year, of any wilderness area in the western United States. The Mt. Whitney trail corridor is the most challenging trail to manage in the National Forest System and has the only day use quota and permit requirement on any National Forest. This land, where the desert meets the mountains, was first reserved for its timber, water and forage. Thanks to decades of public management, the lands of the Inyo National Forest continue to supply clean water to over 3.8 million people, renewable forests, homes for wildlife from Sierra Nevada bighorn sheep to the Golden Trout, and the peace of the outdoors for nearly four million people annually, the most for a National Forest in California.. The Inyo consistently ranks in the top 5 National Forests in the U.S. in recreation use and its developed recreation sites (campgrounds, picnic areas, nature trails interpretive and historical sites, visitor centers, etc) receive the most use of any one National Forest in the country, approximately twice that of the #2 National Forest in this category.

There are 238,000 acres of old-growth forest on the Inyo National Forest, primarily consisting of Lodgepole pine (Pinus contorta) and Jeffrey pine (Pinus jeffreyi). 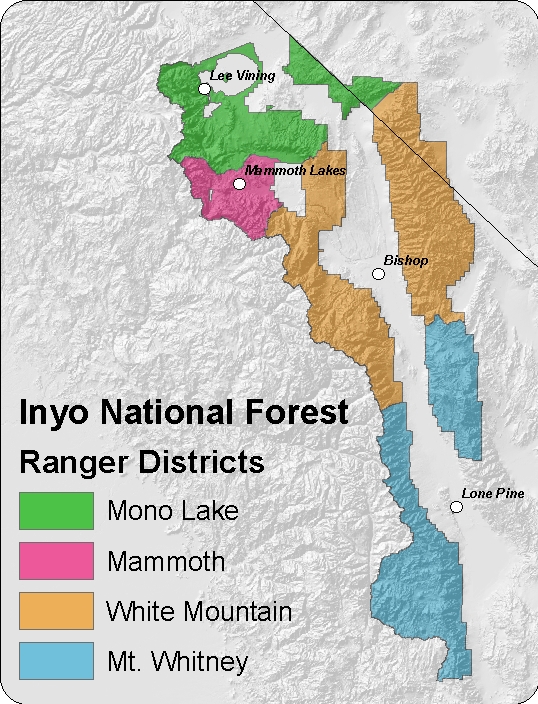 The Inyo National Forest has 3 nets, Forest Net - North, Forest Net - South and Service Net. The Mono Lake and Mammoth Ranger Districts are on the North Net. The White Mountain Ranger District uses the North Net for those areas north of the bottom of the Sherwin Grade on U.S. 395 (McGee and Rock Creek Canyons and the Casa Diablo area east of Crowley Lake) and the South Net south of that point (Buttermilk Country, Bishop Creek and Big Pine Creek to Division Creek as well as the White Mountains (Westguard Pass north). The Mt. Whitney District uses the South Net only (from Division Creek south to the Kern Plateau and the Inyo Mountains - south of Westguard Pass). The entire east side of the White Mountains is covered by Piper Peak on the South Net, a site east of the White's in some low lying Nevada Mountains. Silver doesn't cover the east side of the White's. Some areas of Bishop Creek and the north end of the White Mountains are covered by Glass Mountain only (Tone 3) and are exceptions to this North Net/South Net configuration. Silver Peak, northeast of Bishop in the White Mountains is the only electronic site with repeaters on all 3 nets and is the location of the North Net remote base. The South Net remote base is on Mazourka Peak northeast of Independence. The links for the remote bases utilize UHF only. Radios are now equipped with a switch to enable simplex or direct communications on the output frequency of repeater pair channels, thus freeing up channels formerly used for direct communications only.

The Inyo National Forest fire organization is combined with the Bureau of Land Management (BLM) Bishop Field Office fire organization into one Interagency Fire Management Organization. The management area combines the public land of the Inyo National Forest and Bishop Field Office in Inyo and Mono Counties in California and part of Mineral and Esmeralda Counties in Nevada, covering over 2 million acres. The Interagency Fire Management Organization maintains 8 fire stations with 9 engines, 7 fire prevention patrol units, 2 water tenders, a 10-person fire use management hand crew, a 20-person hotshot crew, an air tanker reload base and a helitack base. This organization, as well as the non-fire management personnel of both agencies, use the two Inyo National Forest nets for its primary nets. The BLM net is used as an alternate dispatch or command net when multiple fire starts/large incidents occur.

(1) Inyo National Forest Radio Group 7 - North Backcountry, Channel 9. May be used for backcountry extenders (as well as backcountry repeaters, but this is unknown). Channel is labeled "Trails."

(1) Located on BLM lands east of Bridgeport. It provides radio coverage for the Bodie area and portions of the Mono Lake Basin.

(2) Located on the Toiyabe NF near the U.S. 395/California State Route 108 junction. It provides radio coverage for the northern portion of the Bishop Field Office jurisdiction.