The Sierra National Forest is divided into the Bass Lake (District 1) (north of the San Joaquin River) and High Sierra (District 2) (south of the River) Ranger Districts. The Forest Supervisor's is in Clovis. 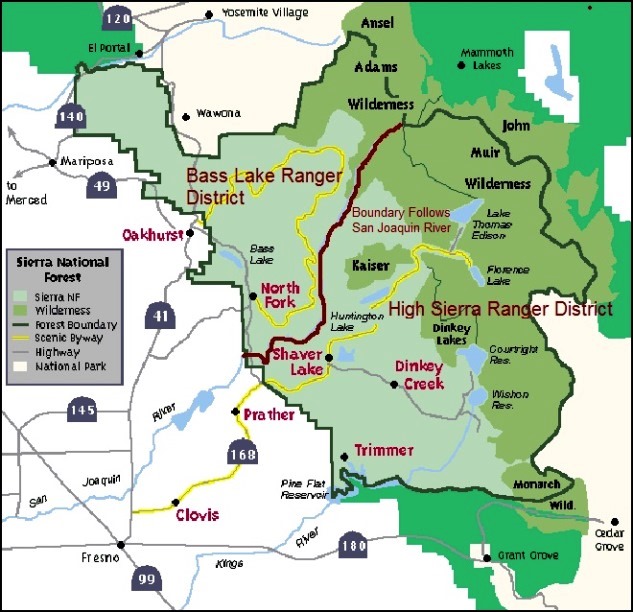 The Sierra National Forest has an "Emergency Net" and an "Admin Net." The emergency net is used by fire management and law enforcement. The admin net is for all other functions. Channels have been provided to enable direct or simplex communications on each net. The installation of 5 of 11 of the NIFC command frequencies in the primary group of channel assignments is unusual. Another unusual feature of the forest's radio system is that the repeater input or access tone is not transmitted on the output frequency, instead a different set of tones is transmitted on the output. For example, the input tone for the Shuteye Peak repeater is Tone 5 - 146.2, but the tone transmitted on the output frequency is 82.5. The assignment of the output tones of the remaining repeaters has not been determined. They are all in the lower frequency range of CTCSS tones, such as 71.9 and 77.0. The linking system the forest uses is to be determined. The system's hub remote base is likely on Musick Mountain or Mt. Givens.

The Sierra uses the district number, function number, position number identifier system for ranger district non fire management personnel. The Forest Supervisor's Office uses the "function name" system position identifier system. The Bass Lake District Ranger uses "Ranger 1" and the High Sierra District Ranger uses "Ranger 2." Starting in 2015 the entire forest will be using the "function name" position identifier system. It is believed that the Bass Lake District will become "Distict 1" and the High Sierra District will become "District 2" when the function name system is established. A consolidation of the Mariposa Ranger District and the Minarets Ranger District into what is now called the "Bass Lake Ranger District"; and the consolidation of the Pineridge Ranger District and Kings River Ranger District into what is now called the "High Sierra Ranger District;" occurred in the late 1990s. The fire management function is organized into battalions based on the old ranger districts. Battalion 1 (the old Mariposa RD) is used for the Jerseydale, Midpines, Westfall and Batterson stations. Battalion 3 (old Pineridge RD) is used for the Mountain Rest and Big Creek stations. Battalion 4 (old Kings River RD) is used for the Trimmer, Blue Canyon and Dinkey stations. Finally, Battalion 5 (old Minarets RD) is used for the North Fork, Clearwater and Minarets stations. It is believed that non fire employees are assigned identifiers with the first number of 2 if they work on the Bass Lake RD and the number 3 if they work on the High Sierra District. Function numbers are: 2 administrative, 3 ecosystems, 4 timber, 5 lands and special uses, 6 recreation and wilderness, 9 silviculture (art and science of controlling the establishment, growth, composition, health and quality of forests and woodlands to meet the diverse needs and values of landowners and society on a sustainable basis).

The Sierra National Forest Emergency Command Center provides service to the Sierra National Forest and the San Luis National Wildlife Refuge Complex located adjacent to the San Joaquin River in the Central Valley. The San Luis NWR Complex includes the San Luis National Wildlife Refuge (NWR), the Merced NWR, San Joaquin River NWR, and Grasslands Wildlife Management Area. The Complex office is in Los Banos. The Command Center is located at the Fresno Air Attack Base, an interagency Forest Service - Cal Fire facility at the Fresno Airport. The center is co located with Cal Fire's Fresno-Kings Unit Emergency Command Center. Each agency is included on the automatic initial attack dispatch plan of the other agency. The Forest Service dispatchers use the identifier "Sierra."

The Sierra National Forest repeaters transmit a different and non-standard tone on the repeater output frequency. The tone for all repeaters is yet to be determined. These tones are in the lower CTCSS frequency range, i.e. 67.0 - 97.4.