“The Smiles of Gods” is what the Native Americans, who first settled this land, called it. The forest is named for the county in which the greater part of the forest is situated. The county, in turn, is named after the Native American tribe, the Modocs. The history of the Modoc National Forest begins with the setting aside of two forest reserves by President Theodore Roosevelt in 1904 at the request of the local ranchers. A proclamation by Roosevelt on November 29, 1904 created the Warner Mountains Forest Reserve and the Modoc Forest Reserve, both renamed "National Forests" in 1907 when all Forest Reserves became National Forests. This same President added an additional 570,000 acres on February 13, 1908, and on July 2, 1908 combined the Warner Mountains and Modoc National Forests into one administrative unit, known thereafter as the Modoc National Forest. The forest covers 1,654,392 acres and is located on the on the huge Modoc Plateau where vegetation tends to be sparse. Recreation use is low as compared to the other 17 National Forests in California with approximately 175,000 visits. There are single developed recreation sites on other National Forests in California that have more visits.

Separated from the more heavily populated and intensively used areas of the Sacramento Valley by the main Sierra Nevada mountain ranges, the Modoc lies in the extreme northeast corner of California. The topography is diverse, ranging from the forested Warner Mountain range in the east, to the high plateaus dominated by sage steppe and ancient lava flows around Alturas, and culminating at the Medicine Highlands (the largest shield volcano in North America) in the west. The high desert climate in the valley areas consists of four distinct seasons and an average precipitation of 13 inches, a large part of which comes in the form of snow during the winter months of December to March. Elevation levels in the Modoc range from 9,906 feet at Eagle Peak in the South Warner Wilderness, to 4,000 feet in the valleys. 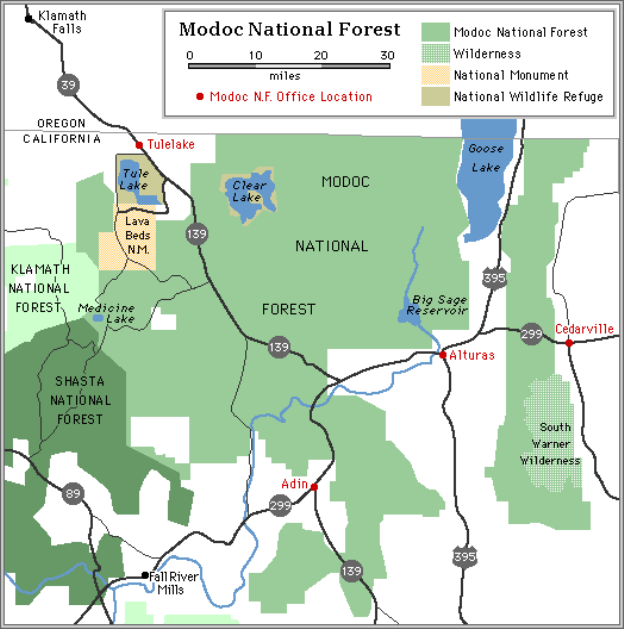 The Modoc has a Forest Net, Admin Net and Service Net with only 6 repeater sites, the fewest of any National Forest in Region 5. The is a repeater for each net at each electronic site. The Modoc's gentle terrain is such that higher points, a few of which have electronic sites on them, sites can "see" a great deal of land. At least some of the sites are linked by microwave, but not much is known by hobbyists about the location of remote base stations and other design features of the system.

The unit identifier system for non-fire management is unknown. It is unknown what number the identifiers of non-fire employees of the Supervisor's Office are based on. The Modoc Interagency Communications Center coordinates and dispatches resources to respond to wildland fires and all risk incidents within the Modoc National Forest, Lava Beds National Monument and the Lower Klamath Basin and Modoc National Wildlife Refuges. Ranger District identifiers use the numbers 3, 4, 5 and 6. Lava Beds National Monument use the number 7 and the U.S. Fish and Wildlife Service uses the number 8. The identifier of the Communications Center is "Modoc."

(1) Tone 1 (110.9) must be used to contact dispatch or a Ranger District office on these simplex channels.