The Six Rivers National Forest was established on June 3, 1947 by U.S. President Harry S. Truman from portions of Klamath, Siskiyou and Trinity National Forests. The Six Rivers National Forest includes 957,590 acres of mountainous land that stretches from the Oregon border south for approximately 140 miles. The Six Rivers also manages the Klamath National Forest's Ukonom Ranger District, bringing the total land under Six Rivers' management to 1,080,000 acres. The designation of the forest had been discussed for 20 years or more before action was finally taken 2 years after the end of World War II. One issue that delayed it for some years was what to name it. 25 names were suggested by various local governments, public interest groups and Forest Service employees, some who had worked on the concept of this new National Forest for many years, and consensus was not being reached. It was found that the name "Six Rivers" was the least objectionable. A name had to be included in the Presidential Proclamation or it would be further delayed and could not be signed. The name "Six Rivers" was inserted and intended to be temporary until all those interested could reach consensus on a better name. Now 67 years later (2014), the forest has the same name. Forest Service employees often shorten the name to "the 6 Cricks."

The Six Rivers National Forest is named for the six major rivers that run within its boundaries: the Smith, Klamath, Trinity, Mad, Van Duzen, and Eel. The Smith, Klamath, Trinity, and Eel Rivers comprise over 365 miles of designated Wild and Scenic River. The Salmon River, on the Ukonom Ranger District, is also a Wild and Scenic River. The Smith River is the only major undammed, naturally flowing river remaining in California. The Six Rivers also has more than 1,500 miles of streams, constituting 9 percent of California's total freshwater runoff. The federally designated Smith River National Recreation Area consists of 307,973 acres of the northernmost section of the Forest.

Elevations across the Forest range from nearly sea-level to approximately 7,000 feet. As a result, the Six Rivers supports diverse ecosystems and landscapes. The Forest is composed of extensive stands of coniferous forest, with moderate amounts of oak woodland and grassland in the southern part of the Forest. These ecosystems provide habitat for eight federally classified threatened and endangered species, including the bald eagle and the peregrine falcon. In addition, 32 plant, 2 bird, 1 fish, and 2 mammal species found in the Six Rivers are designated as Forest Service sensitive species. 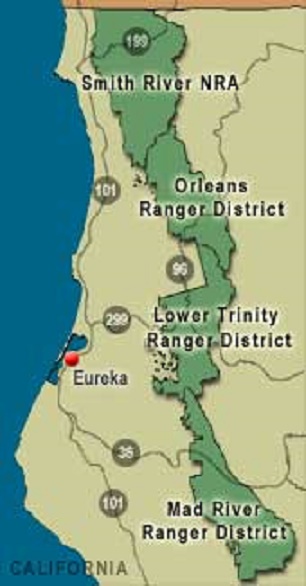 The Six Rivers National Forest has a Forest Net, Admin Net and Service Net. Channels have been provided for direct or simplex communications on the Forest and Admin Nets. The Forest Net utilizes all 14 repeaters on the system, the Admin Net uses 12 and the Service net only 3. While it is not verified the forest likely uses UHF for all its linking given the types of antennas on the tower next to the Fortuna dispatch facility. Scanner listeners from the northern California coast need to report what they know.

The system for identifying non-fire personnel is not known. The employees of the Forest Supervisor's Office have the number 5 in their designators. The Fortuna Interagency Command Center provides dispatch service for the Six Rivers National Forest, Cal Fire's Humboldt-Del Norte Unit, the fire function of Redwood National Park, the BLM Northern California District - Arcata Field Office, the Hoopa Reservation, and the Humboldt Bay National Wildlife Refuge. The Six Rivers National Forest, Cal Fire and Redwood National Park have an interagency agreement for automatic initial attack response with each other and with the Rogue River-Siskiyou National Forest and the Oregon Department of Forestry. The center is located at the Cal Fire Humboldt-Del Norte Unit headquarters. The identifier for the center is "Fortuna."