The Sequoia is one of 18 National Forests in California. It takes its name from the giant sequoia, the world's largest tree, which grow in 38 groves on the forest's lower elevation slopes, the greatest concentration of giant sequoia groves in the world.. Protected within the Giant Sequoia National Monument, these groves and the areas around them are managed by the U.S. Forest Service for today and for future generations. The Sequoia's landscape is as spectacular as its trees. Soaring granite monoliths, glacier-carved canyons, roaring whitewater, and more await your discovery at the Sierra Nevada's southern end. Elevations range from 1,000 feet in the foothill region to peaks over 12,000 feet in the rugged high country, providing visitors with some of the most spectacular views of mountainous landscape in the entire west.

The Forest is divided into the Western Divide (District 2), the Hume Lake (District 3) and the Kern River (District 4) Ranger Districts with the Forest Supervisor's Office in Porterville, on the east side of the Porterville Airport. 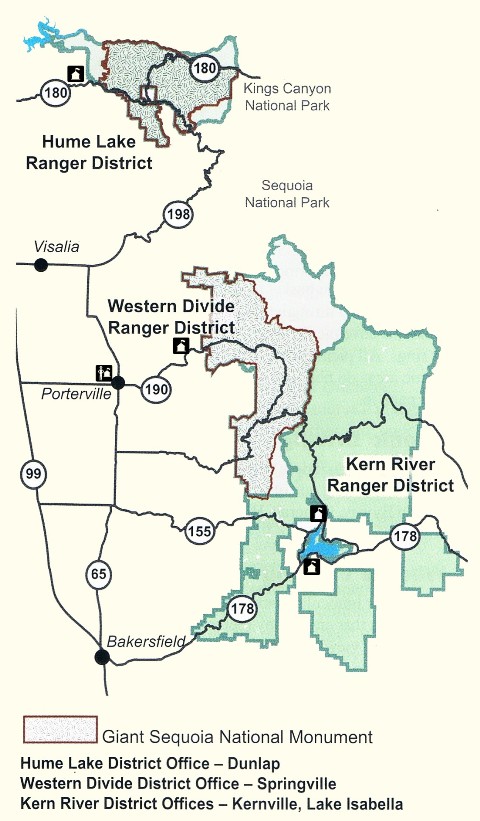 The Sequoia NF has microwave linked remote base stations at Parkridge Lookout, Jordan Peak Lookout, Sherman Peak, Tobias Peak and Breckenridge Mountain. All of these sites have repeaters as well. The forest has a few UHF frequencies assigned to it, but it is not known how they are used. It has 3 nets, the Emergency Net, the Fire Net and the Admin Net. There are no repeaters on the Admin Net, units use simplex to reach the nearest remote base radio to speak to the Communications Center or a District Ranger Station. The Emergency and Fire Nets can be used in a direct or simplex mode and can be used to reach the Comm Center or a Ranger District Station. Each of these nets have 13 repeaters. It is unknown how radio traffic is categorized and assigned to each of the repeater nets.

The unit identifier system for non-fire personnel on the Sequoia National Forest is unknown. Before the function name, district number, position number system was prescribed the function numbering was as follows: 1 District Ranger and various positions such as assistant District Ranger, PIO and planning, 3 Recreation, 4 Maintenance, 5 Timber Management, 6 Resources, 7 Timber Pre-Sale, 8 Range and Wildlife and 9 Administrative. The Central California Communications Center in Porterville, located on the west side of the Porterville Airport, provides dispatch services for the Sequoia National Forest; the Bakersfield, Hollister and Mother Lode Field Offices of the Central California District of the BLM; and the Tule Indian Reservation Fire Department. BLM units have a 4 digit identifier that begins with a 3 (California), followed by a 1 (Central California District), followed by the type of apparatus or person; 0 for chiefs, division chiefs, 1 for battalion chiefs, 3 for Type III engines, 4 for Type VI engines, 5 for prevention and misc., 8 for dozers and 9 for water tenders. Tule Indian Reservation Fire Department units have a 2 digit format with the first digit being 9, except for a Type III engine, Engine 392. The identifier for the Center is "Porterville."