The forest was formed in 1905 when it was named one of the Forest Reserves, which were all renamed "National Forests" in 1907. It is named after pioneer Peter Lassen, who mined, ranched and promoted the area to emigrant parties in the 1850s. The size of the Lassen National Forest is 1.2 million acres. The Forest lies at the heart of one of the most fascinating areas of California, called the Crossroads. Here the granite of the Sierra Nevada, the lava of the Cascades and the Modoc Plateau, and the sagebrush of the Great Basin meet and blend. It is an area of great variety, greeting visitors and residents alike with a wide array of recreational opportunities and adventures. Fishing, hunting, camping, hiking, bicycling, boating, snowmobiling, cross-country skiing, and just exploring and learning about nature are among the many popular pastimes.

Within the Lassen National Forest you can explore a lava tube or the land of Ishi, the last survivor of the Yahi Yana Native American tribe; watch pronghorn antelope glide across sage flats or an osprey snatch fish from lake waters; drive four-wheel trails into high granite country appointed with sapphire lakes or discover spring wildflowers on foot.

The Forest is divided into the Almanor (District 1), Hat Creek (District 3) and Eagle Lake (District 8) Ranger Districts, with the Forest Supervisor's Office in Susanville. 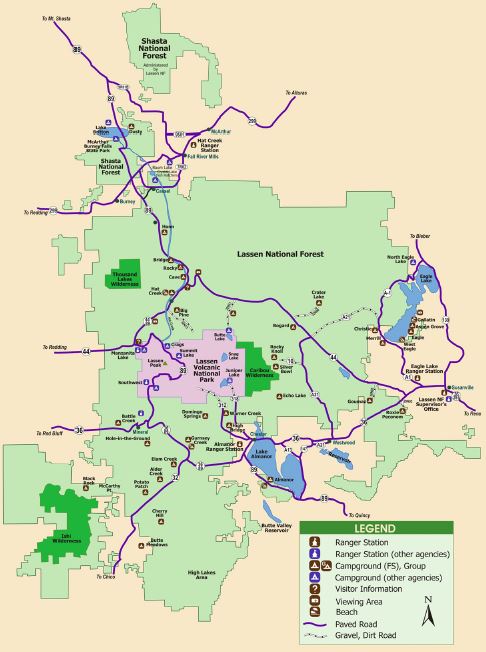 The Lassen National Forest has a Forest Net with 8 repeaters and an Admin Net with 4 repeaters. Channels allowing direct (simplex) communications on each net are provided. There are channels for the fire net of the BLM Northern California District and the local net for the Lassen-Modoc Unit of Cal Fire. The first 11 channels listed are common to all the radios of the Forest, regardless of function or location.

It is unknown what tones are transmitted on repeater output frequencies.