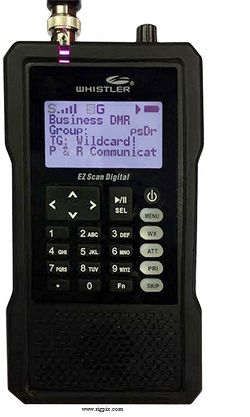 The Whistler TRX-1 is a digital handheld scanner, direct sibling to the TRX-2 Desktop/Mobile Scanner, capable of numerous Digital Modes used in today's Public Safety arena and many amateur & business use digital transceivers. It was announced in May 2016 and released in late June of the same year. The TRX-1 comes complete with the Radio Reference data base on a micro SD card. Upon receiving the unit, be sure to update it to the latest firmware before scanning. The scanner interfaces only with a proprietary software called EZ SCAN™ for programming. Some users report connection problems with Windows based PCs.

The Whistler TRX-1 is a handheld multi-system adaptive digital trunking scanner it allows for 4 AA batteries to take handheld on the go, allowing 7-13hrs hours of continuous monitoring. The scanner is capable of decoding numerous modes of analog and digital transmissions, to include but not limited to: Motorola P25 Phase I, Phase II, DMR, and NXDN making it capable of monitoring the following multiple channels and/or systems at any given time (does not and will not decode Encrypted channels or Systems).

These models feature a full back-lit alphanumeric keypad in addition to the easy-to-use Scan, Pause, Select and Navigation controls. All USA/Canada services and frequencies are pre-programmed onto the included SD card making the units ready to use out of the box – they can even be programmed by entering your ZIP code.

On the micro SD Card

Return to the Whistler Scanners page